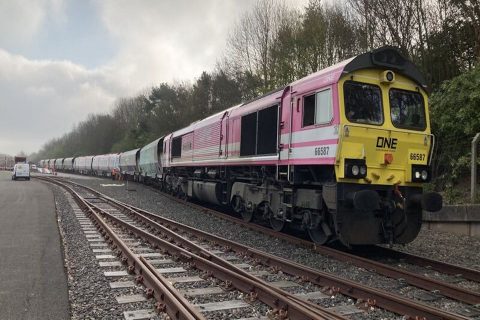 UK operator Freightliner has begun the move of nearly 200 units in an extensive operation for Transport for Wales. The national agency in Cardiff is engaged in a system-wide refurbishment of passenger services. The refurbishment includes three new metro operations, and a brand new fleet of Spanish-built units. Freightliner has been engaged in delivering the entire new fleet from initial holding at Telford, to secure facilities at Crewe in north west England.

Freightliner has been engaged by Transport for Wales (TfW) to assist with the movement, storage and commissioning of their new Class 197 Civity units. The mix of two and three car multiple units will total 180 cars. The order is being supplied to the UK by CAF (Construcciones y Auxiliar de Ferrocarriles) from factories in Spain, with assembly and fitting out at Newport in South Wales. The new fleet is due to enter service next year. The movement in the featured image is hauled by Freightliner’s Ocean Network Express (ONE) liveried locomotive.

Stock movements and storage is a commercially viable niche for freight operators. The extensive TfW project has presented Freightliner with a particularly large opportunity. A total of 77 units are to be built, comprising 51 two-car units and 26 three-car units. “Through utilising our operational expertise and experience we were able to identify a suitable site, close to the customer’s preferred location of Crewe, for storage”, said Matthew Workman, General Manager, North, for Freightliner, in response to favourable industry comments. “We worked closely with both the manufacturer and the customer to develop an operational understanding and method of working for dead hauling these units from Telford and Crewe.”

The new units will be the backbone of services in Wales. The fleet replaces outmoded rolling stock, and will serve a massive upgrade of rail services in the principality, coming on the back of an initiative to bring services into public ownership this year. “The South Wales Metro project that is being delivered by Transport for Wales is continuing to provide a boost to the local economy by providing more opportunities for grounded Welsh businesses and employment”, says a statement from the operator. The investment amounts to three quarters of a billion-pounds (820 million euros). The improvements are a welcome boost for the industry in Wales, which has suffered concerns over future capacity, particularly for freight in the south of the country.

Freightliner’s expertise will see them involved in the commissioning process. “The amount of work that goes into these projects behind the scenes between operations, commercial and engineering is quite something and requires the dedication and commitment of a number of excellent people within our organisation”, says Workman. “We are lucky to have such proactive colleagues with a can-do attitude, underpinned by their excellent technical knowledge. This has helped deliver for our valuable customers and ensured their plans for a new cascade of fleet for the people of Wales and Borders can move closer to a reality.”

From a refurbished facility at Crewe, the new units will be commissioned and then tested. “Really proud of my team at Crewe who have made this happen for our valued customer”, said Workman. “We will continue to move these units and subsequently store at Crewe. By working in close collaboration with TfW, CAF and internally we have made this project a reality.”