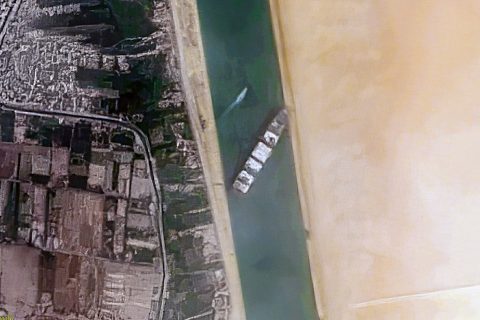 The Suez Canal blockage at the end of March involving Evergreen’s container ship managed two significant things. Firstly, it disturbed the global supply chain, and secondly, it brought to the surface an interesting issue: that of a rail alternative to the busy Suez Canal. The high-speed railway line in Egypt connecting Al Sokhna with El Alamein and, respectively, the Red Sea with the Mediterranean made the news once again, promising substantial gains.

The Al Sokhna-El Alamein rail link has been in the pipeline for quite a long time. In September 2020, an Egyptian-Chinese consortium assembled by multiple companies was awarded the construction tender. More precisely, the companies composing the consortium were, among others, Samscrete Engineers & Contractors (SE&C), the Arab Organisation for Industrialisation (AOI), the China Civil Engineering Construction Corporation (CCECC), the China Railway Construction Corporation (CRCC) and Siemens Mobility.

Connecting Al Sokhna with El Alamein constitutes a mega-project that will affect both passenger and freight transport. However, following the Suez incident, it made it to the news as a dedicated project that will take over traffic from sea transport through the canal and contribute not only during crisis periods but also as a good alternative to traditional Eurasian maritime shipping.

Red Sea to the Mediterranean

However, the project is unlikely to revolutionise transportation around the Suez Canal. In contrast, it will mainly facilitate passenger traffic in the context of a broader investment and development programme in the North African country. Freight traffic will, of course, benefit from it but using it as a substitution for the Suez Canal was not a prerequisite for the project to take off – just a part of it.

The project itself aims to construct a 534 kilometre-long railway line connecting the Red Sea port of Al Sokhna to El Alamein, with the trains also passing through Egypt’s new capital, Six of October, Borg Al-Arab and Alexandria. The overall investment will cost nine U.S billion dollars. Simultaneously, the project is branded as the biggest and longest railway line in the Middle East and Egypt’s most significant rail-related enterprise since 1854. Trains using this line will be able to reach speeds of up to 250 kilometres per hour.

Moreover, as part of the overall planning, the Chinese companies involved will cooperate with the National Egyptian Railways industry Company (NERIC) to manufacture train wagons jointly at the East Port Said Industrial Zone.

SE&C’s CEO Sherif Nazmy had stated in the Egyptian media that the railway project could function as an inland Suez Canal with a transit time of only three hours. Indeed, connecting two different seas by rail could play a significant role in freight transportation. However, is it realistic to discuss a railway Suez alternative, and if so, in what terms?

Let’s begin by analysing the technical aspects of transportation in the region. Evergreen’s container ship was carrying more than 18,000 containers when it got stranded in the canal. To transport the cargo of such a ship by rail, you would need a quite significant amount of trains. However, this is not a must. The average ships passing through Suez carry around 1,500 containers, an amount way easier to handle by railways, always considering the use of sufficient infrastructure and the punctuality and frequency of timetables.

Nevertheless, it is almost impossible and pretty unfeasible to assume that a whole cargo ship will be substituted by several freight trains and argue that this solution could be efficient. This is because shippers and logistic companies also need to calculate the overall time spent in transhipping and loading and unloading procedures. If the Al Sokhna-El Alamein line takes three hours for a complete trip, all these procedures would add up extra time. Considering also the intermediate stops, then the whole process from the Red Sea to the Mediterranean would take much more time than the initial estimation. Yet, determining whether it could be faster than the 12-hour trip of a ship to cross the Suez needs to be checked in practice.

On top of everything mentioned above, according to the project’s coordinators, the inland Suez Canal could take a maximum of up to five per cent of its sea counterpart’s volumes. This means that it could not significantly shift much cargo from the sea to land or function as a competitive alternative.

Still, there are other possibilities. For instance, an active and reliable railway connection in the region could facilitate the global supply chain in emergency cases similar to that of March. Additionally, it could play a role in urgent dedicated services that were not part of the timetables beforehand. Finally, a clever move would be to target the transportation of specific products. Eurasian sea transportation undertakes the transport of several goods, many of which are sensitive and require extra expenses to travel. By offering them an alternative that takes possibly less time to reach the Mediterranean Sea, these goods could potentially choose the transhipment to rail as part of their route in a cheap and controlled way.

In case that all the above fail, though, the project will still be of great importance both for Egypt and Northern Africa. It is indeed an upgrade for Egypt in terms of infrastructure and rail services which will become supposedly faster. Furthermore, it will connect important economic centres and two sea basins that burst with trade activities. The Al Sokhna-El Alamein railway project could become a catalyst for African rail freight and hopefully play a part in Eurasian transport as well.