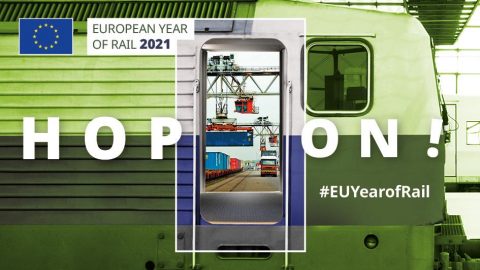 Connecting Europe Express will celebrate the year of rail on tracks

A special train is set to travel across European tracks as of the coming September. The ‘Connecting Europe Express’ will be the flagship project for celebrating the European Year of Rail. It will crisscross the continent, connecting most European capitals and showcasing a crucial message: that rail is the cornerstone of European transportation. The unique initiative will result from the collaboration between the EU Commission and European Railways, while the Community of European Infrastructure and Railway Companies (CER) will coordinate the whole attempt.

The initiative launched on 29 March, during the official Year of Rail kick-off conference. As the Commissioner for Transport, Adina Valean, commented: “The Connecting Europe Express will be a real, tangible example of the power of rail to connect”. In the same tone, CER Chair and CEO of the Austrian Federal Railways, Andreas Matthä, highlighted the project’s importance as it proves the strong commitment of the European Union and the Member States, reflecting the importance of the railway sector.

Citizens and businesses will have a first-hand opportunity to experience and comprehend the collective rail-related objectives through the Connecting Europe Express. Several events will occur at every stop that the train will make, communicating the smart and sustainable rail contribution in passenger and freight traffic.

The project’s unifying character is conspicuous since it will involve many different parties, such as rail operators and infrastructure managers, while at the same time fully utilising rolling stock, track access and staff. As CER underlines, the initiative will be a “massive organisational exercise that will demonstrate the spirit of good collaboration between rail companies and their eagerness to contribute to the awareness-raising efforts around the future of mobility in Europe”.

Investments for the future

However, travelling from capital to capital will not be a piece of cake for the train and its organisers. There will be a need for immense infrastructure investments on several sites to facilitate the whole trip. Moreover, improving infrastructure will also prove that rail-related investments can speed up the TEN-T network’s completion and deliver EU’s Sustainable and Smart Mobility Strategy targets.

Specifically, the smaller-scale investments to realise the ‘Connecting Europe Express’ will resemble the investments needed to reach the European 2050 rail objectives of tripling and doubling passenger and freight traffic, respectively. Consequently, now is the right moment to start moving towards this direction and proving in practice that rail can and will deliver its promises.