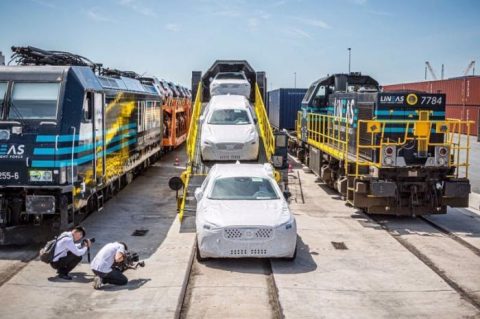 The chairman of Geely Holding Group, one of China’s largest car manufacturers, has made a claim to Chinese government to ‘finally lift the ban on transporting dangerous goods overland’. This ban is a major hurdle to for the transport of electric cars Europe, much of which takes place by rail. With the claim of an influential person as Li Shufu, the Chinese government has once again committed to examining the restrictions.

Li Shufu, who is also a deputy to the National People’s Congress, brought up the topic two separate congress sessions this year, pressing for the option of a policy reform that everyone in the industry has been waiting for. Electric cars and spare parts often include lithium batteries, which are marked as dangerous goods. Large operating companies as DB Cargo earlier stated that ‘it is their biggest wish for 2021 to transport dangerous goods, especially lithium batteries, by rail through China, saying that this would be of great significance for the industry.

Cars and their components have always been one of the main products on the New Silk Road. The railway’s advantages of timeliness and reliability in long-distance transport have attracted import and export car suppliers, enabling domestic cars to go abroad and make an entry on the international market.

Shufu believes that the current ban on the transport of lithium batteries by rail is an anachronism. “The opening of the China-Europe train has created a new logistics route for automotive companies. However, as the current industry standard for rail transport is based on the market environment of decades ago, the strict ban on transporting lithium batteries is causing multiple problems. For instance, it increases the transport costs of new energy vehicles and carbon emissions generated during transport”, he commented.

Shufu’s emphasis on providing a friendly regulatory environment for electric vehicles is based not only on the Geely Group’s new energy development strategy but also on the current environmental situation. At last year’s UN General Assembly, China stated that it is working towards carbon neutrality by 2060, which naturally became an inescapable focus of discussion during the two congress sessions.

In the case of automobiles, the critical step is to replace traditional fuel with new energy. In response to this policy signal, leading domestic and international car brands have innovated and launched new energy models. At present, due to the immaturity of new energy technologies such as hydrogen and solar energy, most of the new energy vehicles are still mainly powered by lithium batteries. In 2020, China’s new energy vehicle sales reached almost 1,4 million units, increasing 10,9 per cent compared to last year. According to the China Association of Automobile Manufacturers, new energy vehicles’ production and sales will exceed 1,8 million units in 2021.

Europe’s pursuit of carbon neutrality is slightly faster than China’s. At the end of 2019, the European Commission announced the European Green Deal, which proposes that by 2050 Europe will be the first in the world to achieve carbon neutrality. In recent years, electric vehicles have gradually penetrated the EU market. Despite the overall downturn of the Western European car market due to the pandemic (25 per cent decrease, back to 1985 levels), sales of plug-in hybrid cars remained untouched and rose to 12,3 per cent of total car sales during 2020.

European countries are ahead of China concerning automotive technology. Still, Europe has an achilles’ heel in the electric vehicle sector, and that is the shortage of raw materials to produce lithium batteries. Most of the key battery raw materials such as lithium, cobalt and nickel are mined outside Europe, with more than half of the world’s lithium extracted in China. Chinese companies also own more than half of the cobalt from the Congo, which supplies more than 60 per cent of the world’s cobalt.

Possibility of lifting the ban

The ban on the transport of dangerous goods (lithium batteries) by rail was due to “high risk, low return” considerations, but the safety of electric vehicles today is not what it used to be, Li Shufu pointed out. “At this critical stage of market growth, major car companies have made electric vehicles’ safety the most important indicator of the whole industry. Moreover, they have adopted various technical requirements and manufacturing standards to ensure that their safety during transportation is controllable.”

Since there are no restrictions on electric vehicles’ transport by rail in the EU, many European car companies are already incorporating efficient, safe, and stable rail freight into new energy vehicles’ supply chain. Learning from successful foreign experiences in due course is also one of China’s critical points of development in this sense.