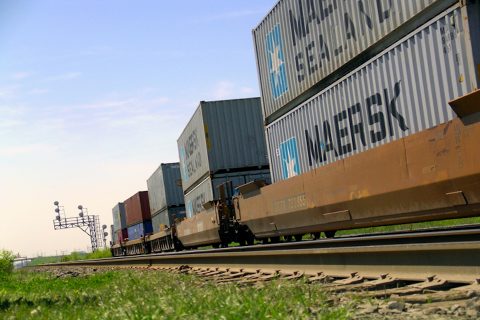 Maersk’s first block-train linking Japan and the UK arrived on 2 March at Felixstowe. The train that carried forty 40-foot containers left Yokohama in January and used the Trans-Siberian route, through Russia, as part of Maersk’s AE19 service.

The new block-train was operated in cooperation with railway provider Modul, Maersk’s long partner in AE19 since 2019. Together with the new train service, Maersk now also offers three weekly departures through AE19 and mainly carries goods between North-East Asia and Northern Europe. Moreover, because maritime transport faces numerous challenges due to Covid-19, Maersk believes that rail shipments between Japan and Europe will continue expanding in 2021.

As Toru Nishiyama, Maersk’s Area Managing Director of North-East Asia, mentioned, it’s all about providing immediate solutions to customers’ needs. “ Being able to offer solutions such as AE19 to our customer base in Japan represents the possibilities that Maersk can bring across many transport modes. I am extremely pleased to see our customers’ support and look forward to making this a choice for more and more customers”, he said.

Apart from that, Maersk seems to have spotted an emerging trend following thirty years of inaction. According to Nishiyama, thirty years ago, transit shipments from Japan to Europe constituted one of the most significant containers flows via the Trans-Siberian route. Consequently, and with the pandemic’s aid, the demand for this corridor is growing again. Through AE19, Maersk aims to re-connect Japan and Europe and re-establish its lost significance.

Maersk’s AE19 service began in August 2019 with a monthly trip between Vostochniy and St. Petersburg’s ports. Later, during the fourth quarter of 2020, then company transitioned from a monthly service to two weekly services.

The beginning of 2021 finds Maersk adding an extra weekly service, and for the first time transporting a full-size container train with goods solely from Japan. “Transit from Asia to Europe via Russia is becoming a more and more attractive alternative to shipping goods via the Suez Canal, even for such sea-borne routes as Japan to the UK”, said Zsolt Katona, Head of Maersk Eastern Europe.