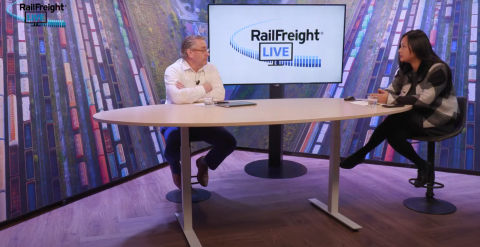 ‘Even with the delays, people still want to book a train to Europe’

A huge amount of cargo is waiting in China to be shipped out to Europe. Trains are running as much as the network allows, but there are limitations. In the meanwhile, with many European countries in lockdown, a lot of cargo is not delivered to the end-customer. The result: full warehouses, a lack of empty containers and re-routings. That is in short the situation on the New Silk Road today, according to the four experts that joined RailFreight Live last Friday.

The conversation, led by Jialu Zhang from RailFreight.cn, was joined from all corners of the world. Roland Verbaak from GVT Logistics and Mike Liu from CMC Logistic joined from Rotterdam, while Osmo Lahtinen from O.V. Lahtinen (Finland) called in from Finland and Bartosz Miszkiewicz from Symlog shared his views from Poland. You can watch it below. The article continues below the video.

That Friday was also the last day of Chinese New Year, a celebration that impacts the industry in all aspects, as it is the largest and longest holiday in China. The end of the holiday means a resumption of trains, production and work. But in contrast to last year, the receiving side in Europe is only partially working, making it all the more complicated, said Verbraak. “Normally, empty containers remain in Tilburg, but as there is no additional storage space, we now send them back via Hamburg or Duisburg.”

Compared to last year, the volumes also increased, and a large part of this comes from ocean shipping, said Miszkiewicz. The prices of sea transport surged, while rail freight remained stable. “At one point, in October, the prices of FCL rail transport were even lower than those of ocean shipping. This brought a lot of customers to rail transport, and these customers have stayed with us. Last year changed everything.”

“It is true, even with the train delays we are currently experiencing, people still book space on the train”, said Liu. “They just want to get their cargo out of China.” It is a luxury problem, one would say, but still a problem. Because the capacity of the network is limited, and the rolling stock not enough. The imbalance between east- and westbound volumes were already one of main concerns, as empty containers did not easily return to China. But container availability can now be called scarce, and the prices soaring.

In that regard, the temporary stop of conduct in China during the festive season has come at the right time. “We are now seeing container prices stabilise”, said Lahtinen, who runs a container leasing business.

The scarce availability of space and assets is particularly problematic for those shipping low-value goods. “These companies are not able to ship out their goods from China”, said Miszkiewicz. “They are waiting for the prices to drop, but this depends on availability of the service. Their cargo has been stuck for a while.”

What then are the solutions at hand? And is it possible to prepare for something that always occurs around this time? According to the experts, there is not much to be done to avoid these market peaks, but there are ways to deal with them. This year, there are already more routes and border crossings than last year, that is a good thing”, pointed out Verbraak.

Also in China, forwarders look for more departure points than before. “Instead of focussing on one or two cities, we also send cargo via places a little further”, said Mike. The shift of route does sometimes mean a shift of destination too, which results in last-mile challenges in Europe. “Sometimes, cargo destined for the Netherlands needs to be picked up in Poland.”

Although many would wish for the luxury problem to stick around, the situation is not likely to stay the same. Prices of ocean freight may turn to lower levels with the end of the Chinese New Year, expects Liu. And, according to him, this could prove to be a competing factor for rail. “I think this could decrease the high demand for rail freight in March and April. Ocean and rail always influence each other.”

Lahtinen is looking at May-June for a slowdown in demand, as his company has received pre-bookings of containers as far as April, he notes. “This could definitely last until summer”, added Miszkiewicz. There is still so much cargo stuck in China, this all needs to get out and be transported to Europe.”