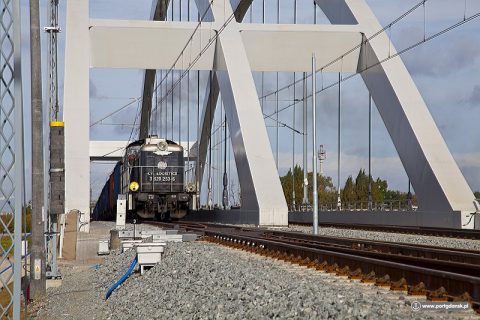 A new direct service has been launched between the port of Gdansk and Ukraine. Via the border hub in Mostyska, cargo is distributed to several locations in Ukraine, including the port of Odessa. The train from the Polish port reaches the Ukrainian border within five days.

The two-way journey is launched by the Odessa-based logistics firm Global Ocean Link (GOL), with the support of the Maersk Line. GOL has its own container fleet of over 150 TEUs, and as it points out, it can provide SOC equipment to customers if required.

The new line is launched just as Poland and Ukraine are expanding overland transport options. What went previously dominantly overseas, could also be transported overland by rail, both countries agree. They jointly launched the Black Sea to Baltic intermodal corridor, which should facilitate the transportation of goods from the broader area of the Black Sea, to Poland, the Baltic ports and Scandinavia.

There are many advantages of using the port of Gdansk, rather than the Ukrainian ports on the Black Sea, agrees GOL. For example, the Polish port is located close to the western markets, and the transit time to or from the main ports of China and the US is significantly less. But there are also economic benefits, says the company. “Freight from China can be much cheaper, so can the cost of loading and unloading operations. Moreover, there are possibilities of fixing tariffs for a long-term period.”

Although this is the first direct line to Gdansk, GOL has had its focus on the border crossing at Mostyska II for a longer time. In April last year, it launched the first train from Poland to Ukraine though this point, calling on various locations in both countries. It did this in cooperation with PCC Intermodal.

“The cross-border terminal has plenty of capacity to facilitate train traffic destined for Ukraine, as well as transit traffic”, said Vladimir Huz, Associated Partner of the company. With the latter, he is referring to transit traffic to the Far East, an opportunity that can result in a true boost of traffic.

Traffic between Poland and Ukraine has grown significantly between 2018-2020. Traffic from Poland to Ukraine increased by 55 per cent in 2019, compared to the previous year. In the other direction, the numbers witnessed even a surge of 132 per cent, both counted in TEUs.