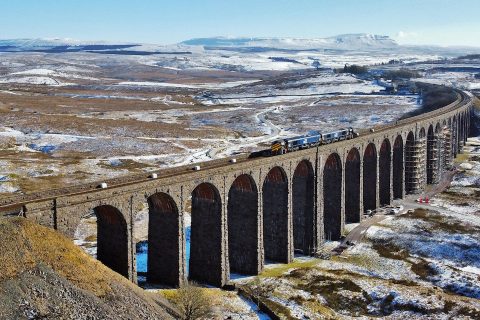 An icon of the British landscape is under repair. Ribblehead Viaduct, in a remote part of North West England, is the subject of 2.1 million pound repair programme (2.5 million euro), to ensure the smooth running of the Settle and Carlisle line. This strategic freight route vital to the UK economy is renowned for its scenic location. The infrastructure management agency for the UK, Network Rail, has just submitted plans for additional repair work on the 150-year old viaduct.

Network Rail specialists, working the harsh conditions of the remotest parts of Yorkshire, have discovered that routine maintenance of the iconic Ribblehead Viaduct will require supplemental attention. Stone blockwork and drainage is being upgraded on the historic structure, which carries the picturesque Settle to Carlisle railway 400 metres across the Ribble valley in Yorkshire. Detailed laser and drone surveys have mapped the Grade II* listed viaduct for the first time, and huge scaffolding towers have been built for the repairs to take place. “Grade II* Listing means the structure is regarded in high importance to national heritage and must be preserved at all costs.

Work began on the vast stone structure in 1870, and it was opened to traffic six years later. This is the first time it has been subject to such a forensic scientific survey. The inspection has revealed that, while the planned maintenance has been progressing well, further minor faults in the masonry have been found. Some of the blockwork on the viaduct’s supports is cracked, allowing water ingress.

Plans have been submitted to the Yorkshire Dales National Park Authority to carry out the extra repairs to the newly found cracks as soon as possible as part of this same project. “Being up close restoring Ribblehead Viaduct for several months now, we have found deeper issues that need attention to protect this amazing feat of Victorian engineering for the future”, said Marc Vipham, route asset manager for structures at Network Rail. “As with any heritage project of this kind, when plans need to change it is standard procedure to submit further planning applications to adapt our work. Carrying out these extra repairs now, when the experts are in place and the scaffolding is already up, will save a huge amount of taxpayers’ money and stop us needing to come back all over again.”

The Ribblehead Viaduct is one of the defining examples of the railway and the Victorian Era in the UK. However, its significance is not merely historical. The line it carries – the Settle and Carlisle, is a vital freight artery, taking traffic off the overcrowded West Coast Main Line. It is use extensively for bulk flows, and will carry more traffic as the HS2 project progresses, requiring more capacity on the WCML.

Network Rail undertake visual exams of the viaduct annually and detailed inspections every six years. They also carry out a major renewals every ten years and a rolling programme of minor works. The line forms a strategic link between the West of Scotland and the North East of England, principally connecting Glasgow and Leeds. The line is also the subject of scrutiny in the UK government’s Union Connectivity Review, which will examine the importance of cross-border links between Scotland and England, including the rebuilt Borders Railway.