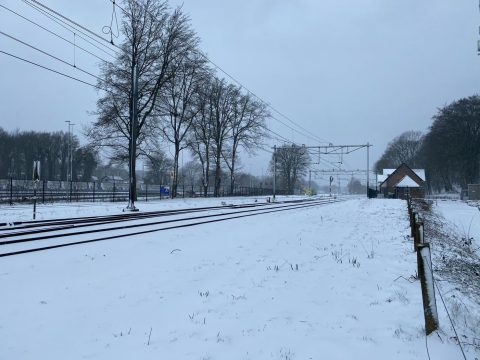 An invention that could largely reduce the number of switch failures on the railways in winter weather has been on the shelf for almost ten years. “Every time a few snowflakes fall, the Netherlands suffocates all travellers,” says Richard de Roos, the inventor of a winter-proof rail switch. Although various specialists have embraced the solution, nothing has been done with it so far.

Last Sunday, freight traffic came to a standstill due to heavy snowfall that covered railway tracks and switches with a thick layer of snow and ice in most of the country. The switches soon proved to be non-functional, and all train traffic was suspended on Sunday. Although switches in the Netherlands contain a heating system, the snow layer was too thick, commented infrastructure manager ProRail. All this happens while we have available solutions, commented De Roos. “Since the winter-proof rail switch innovation has no use yet, we see freight transport in the Rotterdam port left in the cold for the past few days”, he said.

A railway engineer from the Delft University of Technology, where a prototype of the switch has been lying around for almost ten years, is also surprised. “I think in a country like the Netherlands it’s quite a shame that the trains don’t run when there’s a bit of snow”. The prototype at the university of technology was partly made possible by a subsidy from rail manager ProRail but has been lying there gathering dust ever since. In the Nieuws & Co radio programme, the academic pointed out that implementing innovations in the rail sector is “challenging”. “That is not the case only in the Netherlands; it is a global problem. The railway industry is very conservative in this respect”.

Back in 2012, Richard de Roos devised an innovative railway switch that can withstand extreme winter conditions: WIRAS (WInterproof RAilway Switch). The mechanical engineer developed the switch in such a way that it no longer requires heating. Because the switch works with vertically moving switchblades instead of horizontal ones, snow and ice can no longer fall between them. As a result, the winter weather is unable to harm its operation. Besides, the fact that it doesn’t require heating leads to substantial energy saving.

He came up with designing the switch after the problems caused on the railways during the winter of 2012 and winters before that. In 2012, the entire Dutch railway network came to a standstill due to heavy snowfall. After considerable criticism from the Dutch Lower House, ProRail, NS and the then Ministry of Infrastructure and the Environment, presented a package of measures in that same year to make the railways more resistant to winter weather. For instance, they introduced a winter timetable in expected snowfall cases to prevent a ‘snowball effect’ of disruptions.

A winter timetable was also in place this weekend, but it could not prevent the entire Dutch railway network from being brought to a standstill. “It is now claimed that everyone does the maximum feasible to prevent disruptions on the railways, which is not true. There is an initiative, but no one is lifting a finger. That’s a completely different story,” said De Roos. “Last Sunday, everyone once again witnessed the fact that heating points do not work. Yet, much money is spent on them yearly”.

The problem with today’s switches is that they have horizontal moving switchblades, between which anything can fall. Not just snow and ice, but also sand, leaves and pebbles. “This is why current switches require a very high electrical capacity and have to operate for a long time during the winter. They heat the outside air, especially during strong winds”, De Roos explained earlier.

He also presented these solutions to ProRail, contractors and various rail suppliers between 2012 and 2014. “ProRail indicated at the time that the market should develop this further. The suppliers then said: we don’t make anything different than what our customers order from us. Then you’re done talking.”

Simultaneously, various experts embrace the functioning of the system. In 2018, a European research project rated the solution as the second-best system out of 22 solutions in total. It was a three-year study subsidised by Shift2Rail, as part of the European ‘Horizon 2020’ research and innovation programme.

In 2019, De Roos developed a movable point that can survive the winter without heating. During the further development of WIRAS, the mechanical engineer discovered that this technology is also very suitable for making movable switches winter-proof.

However, De Roos finds frustrating the fact that despite all the positive feedback, there is no action to embrace this innovation. “I am told this set of switches is a lot more expensive than a conventional one. That’s true, but an electric locomotive was also four times more expensive than a steam locomotive in the 1950s. That’s what they opted for at the time”, he concluded. “It’s good to look at the long-term benefits and not just the purchase cost”.

De Roos has written a book about the winter-proof railway switch. More information can be found on Winterprooftunout.info.