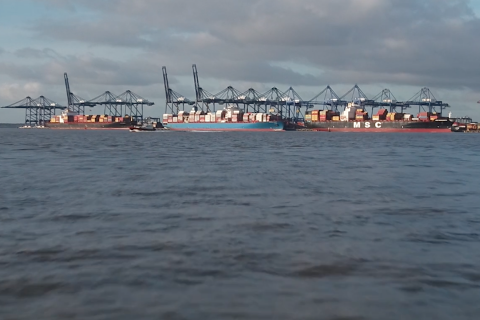 A new freeport for the East of England could create 13,500 jobs in the region, say Hutchison Ports. They are the operators of Felixstowe and Harwich, the two facilities that form the combined bid. According to them, it would be the keystone of an investment of more than half-a-billion pounds (over 550 million euros). Rail freight plays a vital role at both ports and enhances the bid.

Freeport East would see Britain’s busiest intermodal port, Felixstowe, on the River Orwell, formally joined with its neighbour Harwich, on the adjoining River Stour, both in the East of England. The jobs total and the investment figures were set out in a bid submitted by Freeport East in time for last Friday’s UK Government deadline for applications to be among up to ten new designated freeports in the UK. A decision is expected by the UK Treasury in the Spring.

Designed to attract major domestic and international investment, the freeports, described in the UK government as “hubs of enterprise” will allow places – potentially maritime and inland locations – to carry out business inside the UK’s land border, with advantageous customs and trading rules applied. Because any large scale manufacturing would have to be conducted entirely within the freeport, rail logistics are considered a vital part of the concept, in order to move goods in and out of the freeport. The idea has been successfully used in countries around the world, including the UK, to drive prosperity and boost trade.

Felixstowe already handles around 40 per cent of all maritime intermodal traffic trade in the UK, amounting to about four million TEUs annually. Rail connections are vital to connections to the Midlands and the North of England, and Scotland. Harwich International Port on the Essex side of the estuary is a major ferry terminal, and recently expanded its portfolio of bulk handling by rail. Harwich is potentially a site for operations and maintenance of offshore energy installations, and already serves the Galloper Windfarm, part of the Suffolk and North Essex Energy Coast.

Many other potentially competing bids have been submitted, including from Teesside, further up the East Coast of England. There, the metropolitan mayor, Ben Houchen, seeks to turn the port, which largely served the steel industry in the area, into a centre of excellence for renewable energy technology and manufacturing. The port already exploits its extensive legacy of rail connections to distribute bulk and intermodal loads around the UK.

Speaking to the BBC over the weekend, Houchen conceded that freeports were not the only answer to regional economic regeneration, but that the policy was well suited to his region. “Delivering this Freeport is a key part of my plan for jobs and this bid will create thousands of good-quality well paid manufacturing jobs, boost our economy and put more money in the pockets of local workers. It will also support our plans to become the clean energy powerhouse for the UK and help to deliver on the Government’s ambitious target for the UK to be a Net Zero nation by 2050.” However, to meet that target, plans will have to be advanced for the electrification of railway infrastructure in Teesside.

The Freeport East bid is strengthened by its proximity to the recently sanctioned Sizewell C nuclear power plant, approximately 30 miles to the north (54km). Although that project is controversial, the site is historically rail served, and manufacturing development work could take place within the freeport. “Freeport East is uniquely placed to deliver on the Government’s objectives for Freeports, to provide hubs for global trade and investment, promote regeneration and create hotbeds for innovation”, said Clemence Cheng, Executive Director of Hutchison Ports. “Working with our partners and innovators we will deliver a green energy hub that will help deliver net-zero transport systems and complement sustainable developments in other regions.”

More than thirty bids were received by Friday’s deadline. Although a UK-wide initiative, only England has so far reached this stage. Devolved governments in the rest of the Uk set their own agenda. Among the less conventional bids, a joint bid was also lodged by Forth Ports at Tilbury and PD Ports at London Gateway on the River Thames. Freeports have benefitted parts of the UK in the past, most effectively in the former Port of London in the 1980s, which has since become the Canary Wharf financial district.