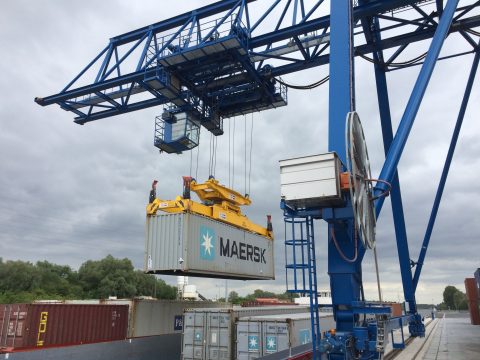 Train and vessel together to extend New Silk Road to Valenciennes

A combination of train and barge resulted in the delivery of a train load of Chinese goods to the French city of Valenciennes. Approximately forty 40 ft containers arrived at the Contargo terminal on Tuesday 2 February for the first time. They had been shipped to Duisbug by train, where they were put on a vessel to continue the journey to the French city on the border with Belgium.

The journey took less than twenty days, of which the journey from Duisburg to Valenciennes took about 60 hours. Per seagoing vessel that had taken about twice as long. “With this first inland waterway transport between Duisburg and Valenciennes the terminal Valenciennes will be included in the schedules of the New Silk Road. This opens up new possibilities for business in our region”, says Gilbert Bredel, Managing Director of Contargo North France.

From hub to France

The containers destined for the French market were reloaded at two different terminals in Duisburg on a vessel of 110 metre long and 11.40 metre wide. This vessel has a capacity of 104 TEU. The Contargo terminal in Valenciennes is the only one in the region which can receive such large Rhine vessels.

Duisburg is the main hub for the further distribution of China cargo to all European countries.Thanks to this new inland shipping service, various terminals can consolidate cargo that is destined for the French market, points Bredel out.