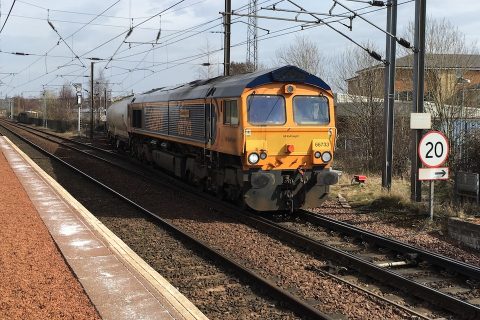 Funding has been secured for the Ashington to Newcastle commuter project. It will see a freight-only line in the North East of England upgraded to mixed traffic status, and regain a passenger connection for the first time in over five and a half decades. The UK government has allocated 34 million pounds (37.6 million euros) for preliminary works to bring the line up to specification, in preparation for a regular passenger service by 2024. However, in common with a much bigger project announced at the same time, electrification is only a passive provision.

Before the UK government announced its ‘Reversing Beeching’ initiative, the ten miles (16km) between Ashington and Newcastle was already earmarked for attention. Now, London has made good on its promise to the North East of England with a 34 million pound (37.6 million euros) fund, allocated for preliminary works to bring that line up to mixed traffic specification. Eventually it will see passenger services run alongside bulk freight for the first time since 1964. Although expected for several months, the announcement came at the same time as a huge investment in the route between Oxford and Cambridge, dwarfing this project by over twenty times.

The tracks between economically underperforming Ashington and the East Coast Main Line already carry bulk freight from Blyth docks, mainly heading north to Scotland. The money promised from London will be spent on preliminary works to bring that section of the line up to mixed traffic specification, and make possible the introduction of a passenger service by around 2024.

According to the Department for Transport, the investment on the Northumberland line will fund preparatory works, including land acquisition, detailed design work and early site works. “Restoring railways helps put communities back on the map”, said the transport secretary Grant Shapps. “This investment forms part of our nationwide effort to build back vital connections and unlock access to jobs, education and housing.”

Plans to build it, hopes that freight will come

Most of the communities served are in the administrative county of Northumberland, and have suffered decades of economic decline, particularly in the loss of have industry and coal mining in the region. The securing of funds has been enthusiastically welcomed. “This is absolutely fantastic news, and means we can now finalise our plans to deliver this transformational project for both Northumberland and the wider region”, said Glen Sanderson, the administration’s leader. “The Northumberland line will bring a huge boost to the area in terms of economic growth, housing, employment and education opportunities, as well as providing a fast and efficient new transport link between the south-east of the county and Tyneside.”

Although primarily built for now defunct coal traffic, some freight still uses the line, and there are hopes that revival will encourage greater use of the rail facilities. Passenger plans for the project include new stations at Ashington, Bedlington, Blyth Bebside, Newsham, Seaton Delaval and Northumberland Park in North Tyneside, as well as upgrades to the track and changes to level crossings where bridges or underpasses may need to be built.

There is common concern however that, despite widespread desire to green the economy, the line will not initially be electrified – a contentious issue which has already drawn fierce criticism of the much bigger East West Rail project between Oxford and Cambridge, where lack of freight provision is also an issue. Given however the shorter length of the Northumberland Railway – ten miles as opposed to eighty (16km – 125km) – the transport secretary expressed hope that “new technology” would be the answer in the North East. “These lines might potentially bypass the overhead wire technology altogether”, said Shapps. “We are building it in such a way that we can use, probably, the very latest technology, potentially, in the future,” he said.

Certainly, operators already are looking at ways of range extension for their motive power, to reach unwired locations. DRS already has a fleet of bi-mode electro-diesels in service (class 88) and as recently reported, Rail Operations Group have on order a fleet of tri-mode electric-battery-diesel locomotives based on the same Stadler platform, designated class 93.

Shapps’ hopes for pure battery or hydrogen freight locos may be somewhat futuristic. Then again, the very thought of reopening rail routes was, until recently, somewhat fanciful as well. Now, several lines are under active consideration, from Fleetwood near Blackpool, to Fawley near Southampton.

Reversing Beeching is a UK government initiative to reopen lines, and upgrade freight only lines to mixed traffic standard, which were closed or downgraded as a result of a radical rationalisation undertaken in the early 1960s, commonly named after its chair, Richard Beeching. The disenfranchised communities up and down the country are popularly beloved to have fallen victim of the so-called ‘Beeching Axe’. Most have failed to prosper since.