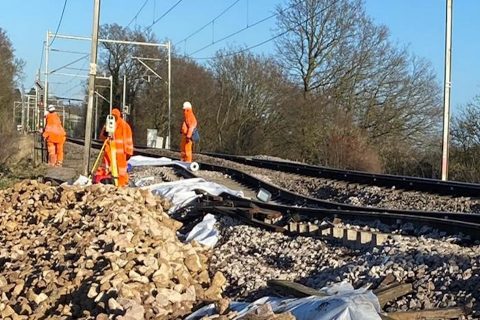 Norwich-London route back on track after collapse

The mainline between London and Norwich has fully reopened, after an embankment collapse curtailed services between the capital and the cities of Norwich and Ipswich. Freight operators had limited access to and from Felixstowe, Britain’s busiest container port, and from the adjacent port of Harwich.

Services have now fully resumed on the Norwich and London Great Eastern Main Line, following emergency embankment works at Ingatestone, between London Liverpool Street and the city of Chelmsford. The earthworks upon which the tracks sit collapsed without warning, necessitating an immediate partial closure, while repair teams went to work. The line has now been remediated and opened for a full mixed traffic service.

Since Friday (22 January) engineers were at work to stabilise an embankment at Ingatestone on the Great Eastern Main Line. The line connects London with Ipswich, Norwich, and the ports of Felixstowe and Harwich. Although a serious failure, the incident did not entirely close the route.

However, single line working was required, with much of the outer suburban services and commuter trains that normally use the route cancelled. Felixstowe intermodal trains and Harwich bulk trains were still able to reach London. Harwich, were bulk traffic has been growing, specifically to serve the London construction market, would have been disproportionately hit, had the works not been completed quickly.

A full service has resumed, with engineers expected to be on site for a further two weeks to complete the works. The infrastructure management agency for the UK, Network Rail, has been busy with a number of issues around the country, so they were pleased to be abele to resolve this potentially disruptive challenge quickly.

“We’ve worked non-stop since last Friday in order to reopen the line quickly and safely”, said Ellie Burrows, Network Rail’s route director for Anglia. “This work could not have been completed without the support and patience of those living nearby and I’d like to thank the community of Ingatestone for persevering with noise and lorries in their neighbourhood.”