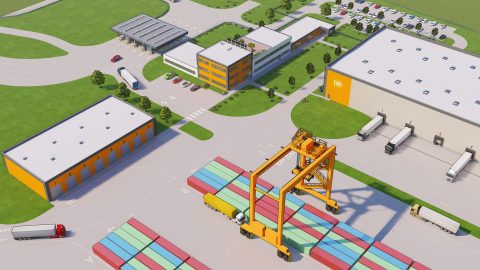 Is a new Silk Road gateway in the making?

Construction has started on a new state-of-the-art terminal near the border of Hungary and Ukraine. Around the same time next year, the first trains will roll through the facility in Fényeslitke (Hungary). The operators of the East-West Gate (EWG), as the terminal is called, foresee to play a key role in delivering goods between Asia and Europe.

The route via Ukraine has been gaining significance, but very little volumes have been shipped on the route continuing through Hungary. The infrastructure is relatively limited, and the border facilities not up to date to handle a large influx of goods from, or to China. The new, modern terminal is about to change that. With the upcoming Hungarian railway line developments, the terminal operator expects to have a capacity of 1 million TEUs per year.

Construction of the substructure of the terminal and the normal railway connection are currently in progress. There will be five normal gauge and 5 narrow gauge tracks, each 850 metre long. “Therefore it will be possible to serve four 740 metre-long trains at the same time”, the company notes.

Moreover, it will be able to handle ATEX- and ADR-certified 45-tonne cranes with dangerous goods and special handling materials – such as gas tank containers and chemicals – can also be transshipped. Furthermore, the terminal is also suitable for craning conventional semi-trailers onto rail wagons.

The route via Ukraine is considered a fast route to destinations in Central and Eastern Europe, but most of the traffic enters the EU via Poland. However, for destinations in Austria, Switzerland, Italy, Slovenia, Croatia and Germany, the Hungarian route is an interesting option for trains coming from China.

The trial operation of the facility is scheduled to begin in January 2022, while its final handover is scheduled for the first quarter of 2022. The61 million euros investment is financed entirely from private sources. The Hungarian Government has provided 8.2 million euros to EWG as a job creation subsidy.