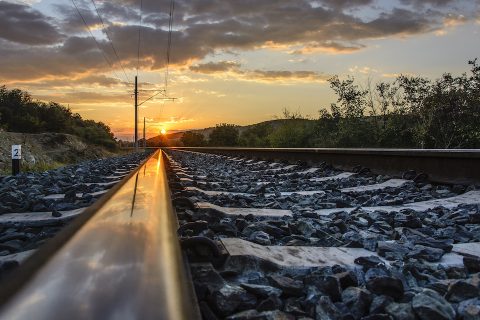 This is the good review of the year, with a strict rule to see beyond the unhealthy health headlines. The UK industry has been telling RailFreight.com what really went well in the past twelve months. Growth, technological advances and new faces with new approaches, there has been plenty of sunshine upon which to reflect.

The day is finally here. Britain pulls up the drawbridge, lowers the portcullis, makes any number of other medieval metaphors you care to mention and says: ‘Goodbye, Johnny Foreigner’ in 27 different languages – including English, which will be shouted louder and louder until that Mr Foreigner finally understands. That was 2020, that was – and, for all the furore and fulminating, it was quite remarkably ‘business as usual’ in our rail freight industry.

Chris Polack, from the Chartered Institute of Logistics Rail Forum, and the principal at Bootham Network Solutions consultancy, says: “The best thing about 2020 has been the greater understanding by national, regional and local government of the vital contribution the rail freight sector makes to the British economy.” It’s certainly true that rail has been on the political agenda this year, with devolved and national governments making overtures to industry, and planing for infrastructure and network growth. Prime minister Boris Johnson evoked “build back better” as his catch phrase, and we have actually seen projects begun.

“I’m delighted that for a number of reason the two pillars of modern rail freight , intermodal and construction, both had a successful 2020”, says David Cross, director at DC Consult, who is strategically involved in terminal developments, including iPortRail in Doncaster and Mossend International Railfreight Park near Glasgow. “All the staff involved in these successes should be thanked and congratulated for their considerable efforts. Modern rail freight  has become even more relevant and more respected in 2020 and now sits at the Logistics top table. The hub and spoke concept that has served international shipping so successfully for some years is now very much a part of the rail freight agenda. New inland terminals opening at East Midlands Gateway and iPort, and for construction at Cricklewood in London. The benefits rail freight can bring to carbon reduction have also emerged strongly this year.”

John on rail freight and Charley on Network Rail

East Midlands Gateway, which opened in January, has reportedly transported 30,000 containers by rail already. John Bailey, managing director at the operators Maritime, which runs the rail freight hub, reflected on the above forecast figures. “Through the summer we have slowly but surely built up and have seen a real surge of volume into the UK in the second half of the year.”

Network Rail, the UK infrastructure management agency, has surged ahead too. Charley Wallace, the newly appointed freight director, says the best thing in 2020 has been action on the rails, doing what the industry does best. She has overseen a busy twelve months. “The UK rail freight sector, the stakeholders and opinion formers, came together to consider how we worked together and then to deliver the goods, literally! This saw a huge amount of collective effort and collaboration without exception, as trains were made longer where possible and that extended to Network Rail’s Routes and Region’s who were instrumental in ensuring the network remained open throughout.”

More trains on the tracks epitomised the weekly statements from operators. Another new appointment, chief executive Andrea Rossi at DB Cargo UK, said the sector has done much to improve its performance and add greater value to supply chains. “We want and are capable of delivering much more than the traditional ‘hook and haul’ services we have focused on in the past”, he said. It’s certainly true that Rossi’s ‘Big Red’ has been behind some innovations at the heavy end of the scale, and there have been exciting collaborations in those construction and intermodal sectors.

For their part, GB Railfreight have been moving containers all over the country too. Lately, they announced a collaboration with MSC shipping to move big boxes from port-of-the-moment, Liverpool, to terminal-of-the-moment, East Midlands Gateway. Demand at EMG has epitomised the intermodal sector. Daily services currently running in and out of the terminal include one to DP World London Gateway operated by DB Cargo UK, two to the Port of Felixstowe also hauled by DB Cargo UK and Freightliner, and one to the Port of Southampton hauled by GB Railfreight.

Scotland’s vast timber reserves finally got back on track, after an absence of more than a decade, with Victa Rail’s successful experiments in the very far north. The willingness of the industry to innovate, and look beyond the low hanging fruits, has been a recurring debate in 2020. Putting technology to work, in a traditional utility like the railways, has always been a point of contention. With the digital railway as keen a topic as ever, that debate will continue into the new year.

Timber is not the only traditional commodity making a comeback. At the other end of the loading gauge, much high-tech planning has been going on behind the scenes with players who hope to make small beautiful again for rail freight. Phil Read at Varamis, is among a raft of innovators with an eye on the light logistics and parcels market. “This year has been all about planning”, he says. “There are some operations already, which have caught the attention, but this is a sector that has growth written all over it. The stars are aligning for light goods by rail.”

In a year that saw Direct Rail Services direct their bi-modal locos up the East Coast Main Line; PD Ports, DB Cargo and many others contribute to charities around the UK; and Hutchison hitch up with former transport secretary Chris Grayling as an advisor to much maligned Felixstowe container port; no eyebrows were raised higher than those of the permanently smiling Jon Bunyan, who, after a long career with Freightliner, has become director of JB Rail Consultancy. “Seasons salutations to you and your loved ones”, he told RailFreight in typically festive cheer. “The best thing in 2020 was the February confirmation in parliament that HS2 should proceed. My hope is that will free up much needed capacity on the West Coast Main Line for freight to continue to flourish.”

Growth in the rail freight industry has already been good news for career development. Tilly Allen at the Apprenticeship College, has been bringing on learners from all round the industry, as the sector has brought more opportunities right around the UK. She highlighted working with rail freight operators in 2020. “Finding new ways to work together as a team at The Apprenticeship College and the launch of our Supply Chain Apprenticeship which had enabled us to work with an audience we may not have had the opportunity to have done so before”, she said.

Maggie may be forgiven if that listing is just a highlights package. In a year that promised so much, delivered so much that was unexpected, and challenged everyone in every way, Britain’s rail freight sector, and its partners throughout industry, did things in that most British of ways. They kept calm and carried on, and looked back on a year of quiet achievement.