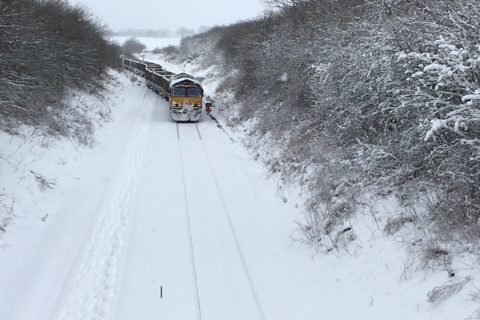 Christmas may not be the same in the UK this year, but at least the Santa-specials have gotten through. There is an avalanche of Christmas goods to be delivered by rail freight, to keep the Christmas spirit uplifted for the nation. The representative body, the Rail Delivery Group, has summarised the role played by rail freight. Among the impressive statistics, 30 per cent of stock for Tesco, the largest supermarket chain in the UK, reaches the shelves by rail.

New figures reveal that rail freight has played the role of Santa Claus in the run up to Christmas this year.
The supermarket giant Tesco, the third biggest retailer in the world, has increased its dependency on rail freight to boost reliability and reduce emissions. Among their festive planning, they announced a five million British pounds (5.5m euros) investment in September in new rail freight handling equipment.

Robert Nisbet, director of nations and regions for the Rail Delivery Group said it has been a challenging year for many people across Britain. “We’re happy that rail freight can play a central role in delivering Christmas cheer, ensuring families have everything they need to celebrate in style. Every tree, pudding and toy transported by rail is helping to make this Christmas.”

The amount of intermodal freight transported has increased since last year and by almost 20 per cent over the last decade, say the RDG. Chris Connelly, managing director for Direct Rail Services who operate rail freight transportation for Tesco, has trains running up and down the country.“Every month we transport around 12,000 containers of vital goods to ensure shelves are stocked and Christmas presents available”, he said, claiming DRS relies on something more advanced than a team of reindeer. “Using our state-of-the-art Class 88 locomotives we can move huge loads hundreds of miles and, when running on over-head electricity, with zero exhaust emissions, making it absolutely fantastic for the environment.”

Rail minister, Chris Heaton-Harris MP whose parliamentary constituency Daventry hosts the international rail freight terminal DIRFT, said the sheer volume of festive goods that are currently being transported across the country daily is reflective of the crucial role that the rail freight industry plays at this time of year. “Rail freight has been fundamental in ensuring that the country, and the economy, has kept moving through the pandemic, and I am thankful to everyone working so hard to keep Christmas on track”, he said.

People cannot move but presents get there thanks to rail freight. Christmas is saved after all.

Freight train in the snow image by Network Rail