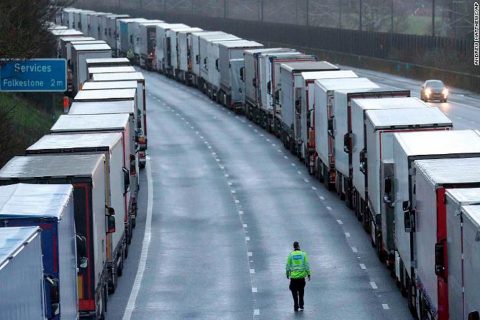 Will rail freight play a role in UK’s blockage?

Pictures of queuing trucks, unable to leave UK freight ports are flooding the news worldwide. The situation caused by the attempt to stockpile goods before the 31 December Brexit deadline, worsened even more due to a mutation of Covid-19 that forced countries to close their borders with Britain. Due to fears for a new virus wave, authorities suspended all freight traffic to and from the UK, with concerns placed mainly on road transport. Now supply chains are bending under the weight of collapse, and the trade sector is looking alternatives in air and rail freight services.

Initial reports stated that freight traffic in the Channel Tunnel was postponed after France’s Covid freight ban. The devastating impact that such a move could have on supply chains was undisputed. However, measures applied only on trucks, while trains could still keep moving at some extend. As a result, many customers, old or new, made desperate contacts to start distributing products via rail, stated John Keefe Channel Tunnel’s spokesman.

Discussions concerning a possible solution to the growing problem included propositions to run extra freight trains between the UK and European hinterland. Such an approach could be ideal but simultaneously tricky to apply. That is so because of all the long preparatory processes that need to be undertaken before opening new pathways. Under normal conditions, these processes could take a few weeks. Consequently, under the current circumstances, they should either get accelerated or last even longer. In both cases, possible occurring problems could be plenty.

Rail freight on the ramparts

Nevertheless, the UK’s freight sector declares its promptitude to handle the unprecedented situation. Even though smaller as a sector than road transport, it has proven its resilience and quality in many cases.

Rail freight could not only prove essential in terms of linking Britain with the rest of Europe. On top of that, it can be crucial in distributing the piled cargo from the British ports to the country’s mainland. After all, congested roads around Dover, for instance, affect transportation in overall and not only with regards to departures from the country.

In any case, decision making and planning should be quick in this situation. Since the rail sector claims to be able to undertake such an enterprise, and since it has spare capacities to provide, it shouldn’t be overlooked. After all, during 2020, it has proved capable of handling crises and reaching where trucks cannot.

According to the latest news, France decided to ease travel restrictions and allow some flows to and from the UK. The European Commission pushed towards this direction since the situation was on the edge of the cliff. Besides the conditioned transportation of some trucks freight traffic is not estimated to return to normal levels soon. Consequently, the rail sector should grasp the opportunity and provide a practical solution now that its more urgent than ever.