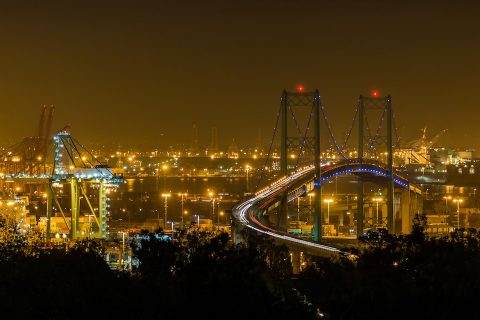 Pacific Harbor Line, an integrated freight operator in the Ports of Los Angeles and Long Beach, is set to showcase a distant relative of a UK freight stalwart. PHL is about to take charge of a demonstrator EMD Joule battery electric shunter – or switcher as they prefer to refer in California. With almost as tractive effort as its Class 66 diesel British cousin, the EMD Joule is certainly more North American switcher than British shunter, and it may well end up on a silver screen near you, playing a supporting role as PHL hosts another film crew.

EMD, now a badge of Progress Rail and part of Caterpillar, is best known in the UK for its ubiquitous class 66 diesel workhorse. However, it is for the application of battery technology that the company is making headlines in Hollywood. In a deal with the port railway operator Pacific Harbor Line, Progress Rail is supplying the impressively powerful EMD Joule battery electric locomotive for a demonstration project operating in the Ports of Los Angeles and Long Beach, California. According to the manufacturers, the new, six-axle locomotive will feature the latest lithium-ion battery technology and battery management system, alongside AC traction and state-of-the-art electronics.

Battery electric both sides of the Atlantic

Battery electric traction is familiar in the UK, as is the switch from fossil fuel technology. Several companies are researching, testing and manufacturing for the domestic and export markets. Notable among them are passenger train manufacturer Vivarail, who re-engineer London Underground stock into a variety of configurations, including battery-electric. Then there is the specialist locomotive manufacturer Clayton Equipment, whose top-of-the-power range battery-electric shunters are comparable with their North American cousins.

It may not be quite as sunny at Clayton’s Burton on Trent base in England, but their equipment may well be found alongside EMD traction in more glamorous locations. However, they may have to wait for a while before any possibility of going head to head in Los Angeles, as the port there is only just beginning its electric odyssey. The 59-mile PHL loops around the port, and annually handles over 40,000 wagons, plus intermodal traffic.

“Zero emission cargo movement is the future”, said Mario Cordero, executive director of the Port of Long Beach, the host facility for the demonstration trials. “We’re very supportive of this effort by Pacific Harbor Line and Progress Rail. PHL is already a national leader in sustainable rail operations, and no one should be surprised to see the company take yet another step forward.”

Despite the traditional impression of North American freight operations being characterised by mile-long intermodal consists and multiple diesel units of dimensions that dwarf any UK measures, there is impetus to decarbonise wherever possible. “Pacific Harbor Line has a long history of using the cleanest rail technology available to serve this port complex,” said Port of Los Angeles executive director Gene Seroka, who has charge of the western half of the joint harbour complex. “As each of our cargo terminals use PHL services for its on-dock rail, we commend Pacific Harbor Line leadership for taking a prominent role with respect to demonstrating zero emission rail technology.”

The zero-emission, zero-idle and low noise EMD Joule is capable of 3,200 horsepower in this application, almost as much as the diesel class 66, albeit designed for lower speed operations. “PHL has always been in the forefront of demonstrating and acquiring successful new, low emission technology”, said Otis Cliatt II, president of PHL. “The Joule is the first battery electric switcher locomotive designed by a major locomotive supplier for North America that appears robust enough for the demanding PHL environment. What Progress Rail and PHL will learn from this demonstration will hopefully advance the prospects for zero emission locomotive solutions.”

PHL is part of Anacostia Rail Holdings, which operates six local and regional freight railroads in seven states, coast to coast, in plenty of photogenic locations. The company is not shy in front of the camera, with filming almost as much a daily engagement as switching dockside rolling stock. If the casting trials are successful, who will PHL screen test next? Vin Diesel may be less in fashion than Carmen Electra, but when it comes to pulling power, its likely the EMD Joule and emissions free traction will be box office for years to come.

that is definitely not The Rock