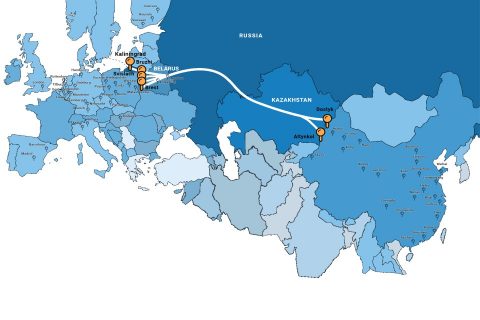 The United Transport and Logistics Company – Eurasian Rail Alliance (UTLC ERA) announced that it already reached its goal of 500,000 transported TEUs on the New Silk Road for the year. The amount concerns the transported cargo through the transit routes of Kazakhstan, Russia and Belarus. The volumes are currently one and a half times higher than in 2019 (333,000 TEUs). Additionally, they constitute a record for rail freight transportation on the broad gauge section between China and Europe.

According to the joint venture of Belarussian, Kazakh and Russian railways, the key factors that led to this record-breaking increase relate to the “predictability and stability of supply that Deutsche Bahn offers”. Moreover, the increase in costs of air and sea transportation, due to Covid-19, played an equally important role.

Since earlier this year the company was receiving positive signals with regards to Eurasian transported volumes. Specifically, for the first seven months of 2020, UTCL ERA handled traffic amounting to 227,600 TEUs, which was equal to a growth of 67 per cent compared to the same period last year.

It is also intriguing to look at the numbers of some of these months. For instance, during May, the company transported 52,500 TEUs across the broad gauge railways. In July 2020 these amounts reached a new high of 54,200 TEUs, 76 per cent compared to the same month in 2019. Month after month, the company was breaking records going against the ominous situation that the pandemic created.

Consequently, and based on these numbers, Alexey Grom, CEO of UTLC ERA, had set a milestone of half a million transported TEUs for 2020. His estimations proved to be correct, since the company reached and exceeded the goal at the beginning of December, way before the year’s end. Justifiably, the bar is now set even higher, and the objective of one million transported volumes that Grom referred to in late November, seems quite realistic for the years to follow.

Apart from corporate goals, the overall image and prestige of rail freight are also boosted in this case. Experts have repeatedly discussed the opportunity that Covid-19 offered to Eurasian rail transportation. Once again, the sector proves that the advantages it provides in comparison to other modes of transport should not be overlooked. The momentum is right, and it would be wise to use examples like those mentioned above for further promotion of rail in the consciousness of trade professionals.