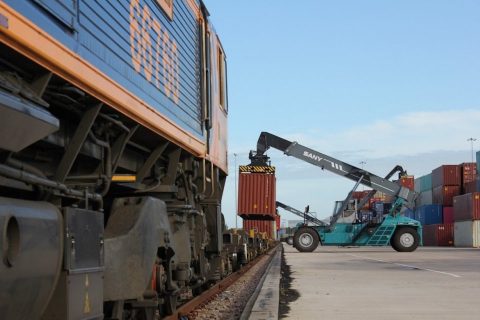 The independently operated terminal iPort Rail, in Doncaster, has this week seen resumption of a sixth daily intermodal service. This brings the terminal back up to pre-pandemic service levels. The service, connecting with Felixstowe on the east coast of England, has been heralded as evidence of economic recovery from the coronavirus pandemic.

The new overnight service will operate six days a week departing and brings the number of daily services between iPort Rail and Felixstowe up to three. The rail terminal at iPort also runs one daily service to Southampton and two to Teesport, including a new service operated by Tesco that launched during the summer. The Felixstowe resumption comes as the port operators there have reported dealing with an unprecedented build-up of containers, and criticism from the road logistics sector for delays.

Felixstowe is not alone in feeling the pressure of container overload. Sea ports around the country have seen increased activity as the volume of containers coming into the UK rises. Operators at iPort Rail say they have been helping alleviate some of the pressure by storing more containers on site, with up to 1500 TEU available. That’s not enough to clear the huge volumes at Felixstowe and elsewhere, but movement is possible around the UK.

Steve Freeman, the managing director at iPort Rail, was relieved to see the recovery. “We are pleased to see the number of trains operating at iPort Rail return to pre-pandemic levels, which is reflective of the steady increase in activity we are seeing across supply chains throughout Yorkshire and the rest of the UK.”

The changing face of rail freight handling is featured in this week’s RailFreight Live, broadcast online this Friday at 1200 UK / 1300 Western Europe. With radically different markets in the United Kingdom and Continental Europe, freight handling facilities look different in the UK.

New facilities like iPort Rail have answered that demand, and, today, they’re also helping Britain recover from the effects of coronavirus. “Throughout this year, our terminal has played a key part in keeping goods moving and supporting businesses”, says Freeman. “We are more prepared than ever to continue helping companies navigate these uncertain times as we approach the end of the year.”

To help cope with the expected increase in administration, iPort Rail is also in an advanced stage of its Authorised Economic Operator (AEO) status application, which will allow the terminal to process customs on site after the Brexit transition period ends on 31 December. It is likely that locations away from the Channel Ports will play a vital role in keeping Britain’s supply chain working, especially in the first few months of 2021.

The terminal at iPort Rail is part of the 800-acre (324 hectare) iPort logistics hub being developed by pan-European logistics specialist Verdion. It is typical of the new model of lean and long rail sidings, backed by extensive storage facilities. It has seen rapid growth since it first opened in late 2018.