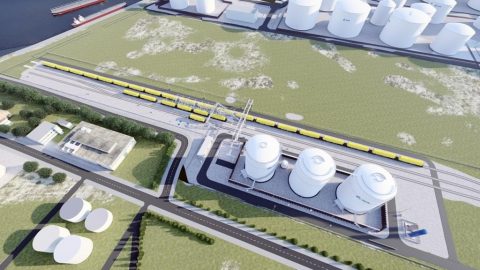 The Port of Amsterdam is about to see an upgrade in its rail system. Following an agreement between Global Petro Storage Group (GPS) and VARO Energy, the upgrade will be part of a broader improvement plan that will be implemented at the port. Alongside with the rail system, the two partners are also aiming to expand the ethanol storage tanks of the facilities.

With this move, GPS Group and VARO Energy are sealing a collaboration of years. Last year GPS Group expanded its Class 1 storage capacity from 148,500 square metres to 282,500 square metres. As for the new rail system and ethanol storage tanks, they will get connected directly with seventeen Class 1 tanks that already exist in the port. As a result, there is a continuity of developments observed, which aims to provide more flexibility in the supply chains.

The new rail line aims to provide a more environmentally friendly transport solution. Moreover, it is a response to the variation of Rhine’s water levels that render transportation with vessels difficult quite frequently. Most importantly, though, the existence of a new rail line will ensure that the port of Amsterdam will cope with the fast-growing production and distribution needs, especially for biofuels and gasses.

Eric Arnold, CEO at GPS, commented on the news: “We aim to identify more environmentally friendly logistics alternatives for our clients and sustainable business cases in growth segments such as biofuels and gasses”.

Amsterdam at the centre

Apart from the fact that the two companies are trying to strengthen their cooperation, this new agreement shows that they aim to centralise the importance of Amsterdam in general. The Port of Amsterdam constitutes one of the world’s “largest trading and blending hubs for gasoline and its components” mentioned Arnold. Consequently, with these changes, Amsterdam’s terminal can unlock its full potential.

On his behalf, Roger Brown, CEO of VARO Energy, said that the scheduled upgrades are “an indication of the commitment that both sides have towards the success of the Amsterdam terminal”. Not only do they aim to improve the situation now, but they can have long-term success, he added.