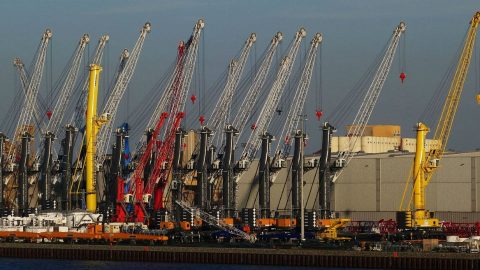 Since the beginning of March 2020, the ports of Rostock and Kaliningrad have established a regular service between them. The service’s purpose is to connect the New Silk Road directly with the port of Rostock via sea. Cargo that arrives in Kaliningrad by rail is loaded on sea vessels that transport it to Rostock. There, it is loaded again on trains and gets distributed in the European hinterland. “The rail-sea-rail connection may sound difficult, but it is not that complex”, mentioned Götz Strahl, Head CRM/Sales at Rostock Port GmbH.

Götz Strahl k is among the speakers of the European Silk Road Summit, which takes place online on 10 and 11 November. During his presentation, he will discuss the keys behind the success of the Kaliningrad-Rostock route on the New Silk Road.

Collaboration between the two ports is not something new. In contrast, they have been working closely with each other for years, transporting loads of gold and metal. The sea service between them, thus, preexisted but got incorporated in a new plan aiming to make it part of the New Silk Road. Discussions and negotiations regarding this move have been taking place since 2017, but it was not until last March that it started operating.

The idea around the recently established service is not to handle all the volumes of the corridor. Its objective is to work as an alternative that can facilitate the distribution of goods arriving from the New Silk Road in the EU. Since excess rail traffic can lead to bottlenecks, a short sea service like this could make things easier and decongest vital routes.

Additionally, it can offer some particular advantages: flexibility in load volumes, as well in the frequency of loops. When traffic demand is rising, it’s facile to readjust the number of trains that can get loaded on a vessel. Consequently, it is easier to maintain short lead times and moderate costs at the same time.

Moreover, Rostock’s function as a hub enables it to be the only Baltic Seaport that has high-frequency connections to Nordic countries (ten times per day with Denmark, sixty times per day with Sweden). As a result, products can also be swiftly distributed in Northern Europe.

Initiatives like the Kaliningrad-Rostock sea connection can be used as examples for facilitating rail freight even more. Since there is a rising demand for traffic on the rail routes that connect EU-Asia, distributing part of the workloads to other modules can be beneficial for rail. Subsequently, connections can run efficiently and faster without causing delays and other unwanted problems. All in all, such multimodal solutions could be taken into account more frequently, since they have the potential of helping the rail sector overcome the dead-ends which it could be facing.

Do you want to hear all about the developments on the New Silk Road in 2020? On 10 and 11 November, the online edition of European Silk Road Summit 2020 takes place. The impact of the pandemic, the current volumes and the forecasts for the year to come are other topics on the programme. Have a look here or register here.