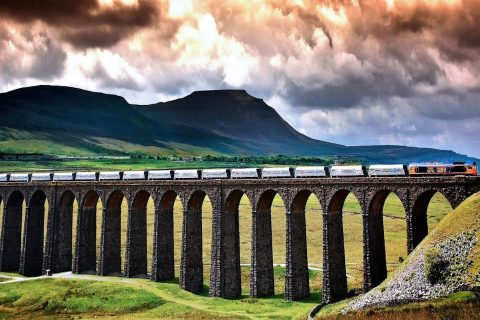 Network Rail, the UK infrastructure agency, is beginning a programme of works on the 144-year-old Ribblehead Viaduct, the key link on the Settle-Carlisle Line. The huge viaduct carries freight and passenger traffic through the north of England, and provides an alternative to the busy West Coast Main Line. Although the Settle-Carlisle route has been threatened with closure in recent decades, it is destined to play an increasingly important role as HS2 traffic demands future capacity on the West Coast.

The 400 metre-long viaduct was in serious danger of closure in the 1970s, due to dilapidation. However, a campaign pressured the UK government into an investment programme, which saved the bridge and the line. It is now increasingly used for heavy haul freight traffic, diversionary routings, and is a popular tourist route. The current programme of deep maintenance will see the 24-arch viaduct secured for the foreseeable future.

Winter on the moors

The bridge is an integral part of the Settle-Carlisle Line, which connects the north of England, including Greater Manchester and the Yorkshire cities of Leeds and Sheffield, with Carlisle and the Central Belt of Scotland. A sister route in the Scottish Borders is being considered for reopening, which would provide a freight and passenger alternative along the entire length of the West Coast.

Despite its remote location, the infrastructure agency in the UK, Network Rail, has recognised the importance of the bridge, and is set to carry out works during the inhospitable winter months. “Ribblehead viaduct has got to be one of the crown jewels of Victorian civil engineering”, said Phil James, North West route director at Network Rail. “We know the structure is incredibly important both locally and internationally, and we want to give it the care and attention that it deserves.”

In addition to carrying an important part of the UK railway network, the bridge is a listed national monument. Any work carried out to keep the structure in working condition also has to comply with conservation regulations. Network Rail is working closely with Historic England and the Yorkshire Dales National Park to ensure the work is sympathetically carried out in line with guidance for historically significant structures.

Paul Brown, chairman of the Friends of the Settle-Carlisle Line, the group that campaigned for retention of the line, welcomed the investment.“This work has come about as a result of regular inspections. We work closely with Network Rail and the Ribblehead viaduct is now probably stronger than it was when the Victorians built it. This work is needed to keep it that way.”

The works, budgeted at 2.1 million British pounds (2.4 million euros), is expected to last until February 2021. Network Rail anticipate no significant disruption to freight or passenger services. With parts of the UK network dating back over 150 years, there are a significant number of historical structures still in daily use around Great Britain.

Network Rail recently announced even more extensive restoration works to another veteran structure, the largely timber-built Barmouth Bridge in Wales, which carries passenger services on the Welsh coast and has periodically been used for freight. The wooden structure is even older than Ribblehead and in the past has been subject to an expensive – if unusual – problem for railway engineers: infestation by marine woodworm. Boring insects are one thing that the engineers do not expect to encounter this winter in the indomitable stone of Ribblehead Viaduct.

Main image: Typical freight operations over Ribblehead Viaduct include bulk aggregates, such as this operation for Tarmac, hauled by GB Railfreight.