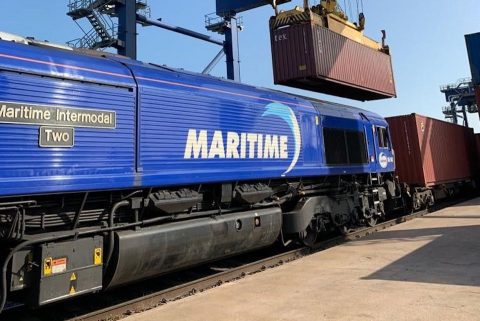 UK specialist freight handlers Maritime Transport today launches a new sea to shore intermodal flow between London Gateway, the terminal owned by DP World on the north bank of the Thames, and the inland facility at East Midlands Gateway Strategic Rail Freight Interchange. The service will operate five days a week, with capacity for up to 34 forty-five foot containers. The trains will be operated by DB Cargo UK under Maritime livery.

This new intermodal flow comes in the face of challenging operational and economic circumstances. The commercial partners involved have said that the current pandemic is an issue, but the question of Brexit has been on the mind of importers and exporters, with the UK finally reaching transition from the EU at the end of the year. Capacity at London Gateway makes it possible to avoid potential congestion at the Channel Ports and for road haulers to avoid the controversial access pass required for the county of Kent.

Launching a new intermodal flow may not be routine in the best of times, but under the current challenges, DB Cargo UK is possibly justifiably proud. In a public statement they expressed pleasure at pulling out the stops for Maritime.”On behalf of our valued customer, the service will operate five days per week between London Gateway and East Midlands Gateway. DB Cargo UK has been able to set up this new service within a short three-week period, a great example of the determination and resilience within our business despite the disruption caused by COVID-19.”

Maritime say the service will operate with 17 FIA twin intermodal wagons capable of taking up to 34 forty-five foot containers in each direction. The intermodal rolling stock was originally developed for Channel Tunnel operations, but has found domestic applications too. The twin pairs are semi-permanently coupled with a 4TEU maximum load. Maritime has been steadily adding services over the summer, with new flows to East Midlands from Felixstowe and Southampton recently announced

The service commencement is well timed. With Brexit becoming a reality on 31 December, there is disruption and delay expected at the UK’s Channel ports. Avoiding the roads of Kent will be attractive to forwarders. The UK government has put in place an unprecedented access permit system, which will require goods vehicles, including domestic trucks, to obtain a transit permit for that part of south east England, and hence the Channel ports.

In contrast, London Gateway, the southern terminal for the service is on the north bank of the Thames, in the county of Essex, where no such regulations are in place. For logistics shippers, especially in continental Europe, the opportunity to reach the heart of England, by rail and without the multiple issues of transit in Kent, will prove attractive. It may soon be overtime for Maritime and those intermodal twins.