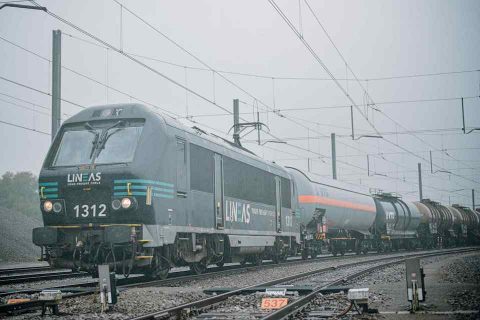 Belgian clays to Scotland via Tunnel

Lineas and GB Railfreight have extended their teamwork for another year. From the west coast of Europe to the west coast of Scotland, a frequent bulk flow from Antwerp to Irvine is guaranteed into its fifth year, thanks to an extended partnership between the largest private operator in continental Europe and the fast expanding operator in the UK.

In a joint announcement, Belgian freight operator Lineas and GB Railfreight (GBRf) have extended their European freight collaboration to continue delivering bulk materials from Antwerp to an industrial plant at Irvine on the West Coast of Scotland. The announcement marks the extension of the existing contract which will now run until the end of December 2021, marking a five-year relationship for this ‘hook and haul’ joint traction flow. The service has so far averaged around 30 trains a year. The cargo is clay for high-quality paper production, particularly for glossy magazines.

The trains arrive in Calais from the Lineas facilities in the Belgian port of Antwerp. They usually consist of around 20 ICA tank rail wagons and carry around 1200 tonnes of kaolin clay per train. “We are extremely pleased to have extended this contract”, said Geraldine Leyman, senior key account manager at Lineas. “Our relationship with GB Railfreight is one example of the importance of cross-border cooperation.”

The kaolin clay, appositely enough used for the process of diamond whitening paper, is used for the high-end products manufactured at the UPM Caledonian Papermill in Irvine in South Western Scotland. Irvine has a rail connected deep water port, which was for many years used to import and export coal from Ayrshire collieries and import ore for Scotland’s former heavy industry installations.

GBRf plan to normally collect the product on Tuesday nights, running through the Channel Tunnel under electric traction. A ubiquitous Class 66 diesel then takes over for the long haul to UPM Irvine to arrive on the following evening. “I am delighted that we are continuing our partnership with Lineas”, said John Smith, the managing director of GB Railfreight. “We are pleased to continue it until December 2021. This service will be the longest term of operation for running services through the Channel Tunnel for GBRf. Our partnership with Lineas shows our commitment to doing our part to reach the ambitious target of net zero emissions by 2050 and we hope to build on this.”

Following unloading, GBRf aim to return the empty set of wagons back to the Channel Tunnel by Friday night for a path back to Calais. This is not the only international operation that involves GBRf. They are also currently operating export and import intermodal services to and from the three largest ports in the UK. The news of this continued flow comes at a good time for the Channel Tunnel operators Getlink, who reported disappointing performance earlier this week.

While GBRf celebrated its twenty-first anniversary this year, Lineas is rather younger. Having been spun out of the freight operation of the Belgian national operators SNCB in 2011, the company now claims to be the largest private rail freight operator in Europe, and have active facilities in France, Germany, the Netherlands, Italy and Spain. The company employs over 2,100 people and owns a fleet of 250 locomotives and 7,000 wagons.

Not all of that fleet is coming to Irvine, but if they ever need to do an inventory, UPM Irvine can surely spare them a ream or two of diamond white paper for the print out.