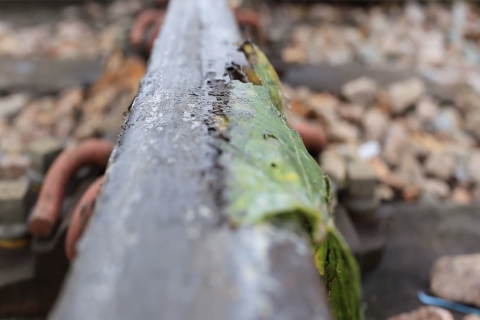 Leaves on the line – why treatment matters to freight operators

It might be the English-speaking UK where the lyrical “leaves on the line” was first coined. But in any language, autumn spells a season of adhesion problems. These are made all the more troublesome when several thousand horse-power of traction and several thousand tonnes of cargo need to start, keep going and most importantly stop at the appointed time. Fortunately, there is a solution – and it is a solution – applied by a seasonal fleet of Rail Head Treatment Trains, deployed with annual regularity.

This time of year, there is a gold rush. Amtrak sees a surge in passengers, heading for the inland stations on the East Coast. In Europe, DB has customers heading for the forests of Bavaria, while Belgians and Dutch make Liege and Venlo busy with visitors heading for the Ardennes – all to see the Autumn leaves in their fiery golden glory. There are high-tech answers from RailTech, but the last thing anyone wants is to be delayed by a freight train, struggling on rails that have already had enough of this seasonal shedding.

In Britain, that island not normally known for its vast forests and woodland wonderlands, everyone is once again discovering just how many trees actually grow there. Realising that if those fast-moving consumer goods are to continue to move fast, then something will have to be done. It’s time for the seasonal ritual of the Rail Head Treatment Train to come to the rescue.

“It’s like driving on black ice”, says GB Railfreight driver Mick Scott, who has experience of freight operations in all seasons and all conditions. Before the leaf-busters warp into action, the going can be tricky. “You have to be really careful, you’re breaking a lot earlier, just to asses the conditions and give yourself time to react.”

Under pressure all over the network

The paradox of making a high-torque locomotive pull low-resistance rolling stock over an inherently minimised-friction coefficient medium (also known as a railway) tends to come unstuck as the calendar moves into October. That inevitably leads to wheel-slip, flat-spots, and the sort of braking performance that is more roller-coaster ride than simple rolling-resistance. As one very famous Scottish engineer likes to say: “You cannot break the laws of physics.” However, you can bend them, with the help of high-pressure wash and a sticky solution with a formula more closely guarded than the recipe for cola-cola.

Having been refuelled and readied for the season, Network Rail deploys a federation of sixty-one specialist trains all over the UK. From Inverness to Totnes, and from Barmouth to Great Yarmouth, the familiar blue – but very soon white – RHTT trains cover the entire UK network in a round the clock operation.

High tech fleet and low tech back up

Making sure that drivers like Mick Scott have a predictable journey, is Network Rail’s network services director, Nick King. “Our preparation for this year’s autumnal weather has been as comprehensive as ever”, he says. “Our highly skilled frontline teams and leaf-busting trains will be working non-stop to help keep the tracks clear and services running on time.”

Nick’s high-tech fleet consists of 29 Railhead Treatment Trains (RHTT) and 32 Multi-Purpose Vehicles (MPV), which cruise around the network, cleaning the top of the rail by spraying it with a water jet at very high pressure (1500 bar) to blast away the leaf mulch. These trains also apply a gel, containing a mix of sand and steel grains, to help the train wheels run along the tracks without problems. Yet, even with all the science of railway technology at their disposal, there are still 80 two-person leaf-busting teams available around the clock to scrub the top of the rails by hand with a sand-based treatment.

Apply the brakes and those laws of physics

All this attention to detail is good news for drivers like Mick from GBRf, who still need to apply their skills as often they do the brakes. “If it does slide you can release the brake, you can reapply. It has some more effect, and you’re giving yourself distance to react to the situation. It does take longer to get where you’re going, because you have the same problem in trying to pull away. Again it’s like pulling away in a car on ice. It will just spin, and you’ll have to keep shutting off power, restarting power, so it can take you a long time to actually get going, three or four times longer than it would normally take you.”

Some of the fleet has been out already. Monday 5 October marks the beginning of the full Autumn campaign. In 2019, say Network Rail, the fleet of leaf-busters treated the equivalent of 895,217 miles of track, clocking up a collective journey to the Moon and back, three and a half times. This time of year, if you cannot see the Moon reflected in the rails ahead, every driver knows it’s time to apply those laws of physics – very carefully indeed.

It’s not only the problem of acceleration and braking. Train detection (when delivered by track circuits) can be affected as well – the thick film of leaves can create insulation (or at least to increase to impedance between wheel and rail), especially for light trains. The best solution to secure proper detection in any conditions is to use axle counters.