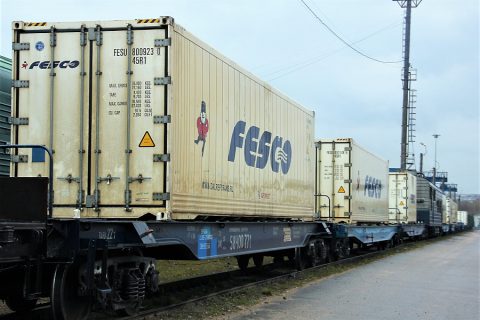 FESCO Transportation Group has launched a regular intermodal container service for seafood delivery from the Russian Far East to Jilin province in China. The seafood is refrigerated in containers and bundled in Vladivostok, where it is loaded on the train to China.

The cargo comes from different locations in Russia’s Far East. Transported by the regular services from the operating company, it comes from Kamchatka, Magadan and Sakhalin to Vladivostok. Shipments originating from enterprises in the Primorye Territory are transported to the Russian port by truck.

In the Commercial Port of Vladivostok (CPV, part of the FESCO Group), all the cargo is collected and reloaded on the train. From here, the train departs to the Hunchunnan station (Jilin, China), a journey that takes four days.Test shipments on the new route began in May 2020. The service became regular in September 2020, and the trains depart one time per week. The ambition is to reduce the delivery time to two days in the future. The expected traffic volume is about 150 TEUs per month.

The new regular service was launched to boost refrigerated transportation within the company, as well as to provide the most efficient logistics for FESCO’s customers and to reduce costs. Transportation of cargo with certain temperature requirements is carried out by Dalreftrans, which is a part of FESCO.