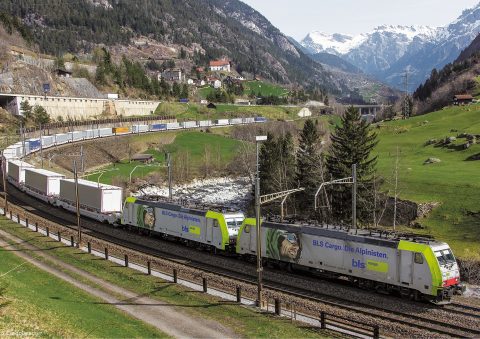 Today, 4 September, the Ceneri Base Tunnel was officially opened. This is a railway tunnel in Switzerland, passing under Monte Ceneri and bypassing the current high-altitude rail route through the Monte Ceneri Tunnel.The opening marks the completion of the New Rail Link through the Alps (NRLA). This in turn forms the core of Europe’s main north-south freight route extending from Rotterdam to Genoa.

Earlier milestones on the NRLA were reached in 2008, when the Lötschberg Base Tunnel was opened, and in 2016, with the opening of the Gotthard Base Tunnel in 2016. The Ceneri Base Tunnel is considered the final link, which should clear the entire north-south axis for 4-metre height trains. This should have a major impact on traffic from north to south Europe.

Watch our RailFreight Live show today for an interview with Guus de Mol, President of the Management Board of the Rhine-Alpine Corridor about the Ceneri Base Tunnel: https://www.youtube.com/watch?v=QoRFpnckASA

The tunnel construction was carried out by AlpTransit Gotthard (ATG) under contract from the Swiss Federal Government. In April this year they had a setback, as the test drives had to be suspended. The operations could not be done complying to the safety requirements, as the required 2-meter distance in the driver’s cab was not maintained. The test operation was suspended until 19 April 2020.

The construction dates back much further though. An exploration tunnel near Sigirino was excavated between 1999 and 2003 to gain geological data on the rock formations. Based on those data, it was decided to only drill a small part using a tunnel boring machine (TBM) while the rest was excavated with traditional blasting methods. Construction of the two single-track bores started during March 2006. The official start of the construction phase was on 2 June 2006.

From north to south Europe

Switzerland plays an important role on the north-south axis of Europe. This axis runs from the port of Rotterdam to Genoa, and is also called the Rhine Alpine corridor. It is the most heavily used corridor in Europe and runs through the industrial heart of Europe. It connects places as Rotterdam, Zeebrugge, Antwerp, Duisburg, Cologne, Frankfurt, Mannheim, Basel, Zurich, Milan and Genoa.

The NRLA is considered an important tool in further encouraging the shift to rail. It is one of the policy measures in Switzerland in this regard. The true effect of this should be seen in 2021, the government explained. The port of Rotterdam mentions that 70 per cent of the goods transported through the Alps are moved by rail thanks to the NRLA, and 800,000 journeys by heavy vehicles are avoided by making the shift to rail.