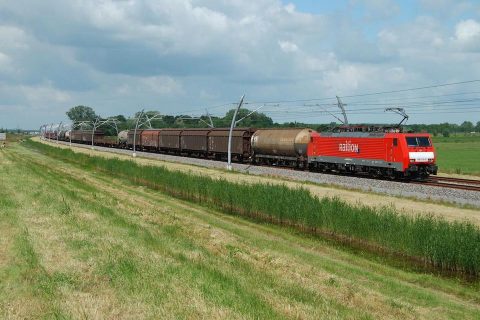 Plans to further expand capacity on the controversial dedicated freight route between The Netherlands Randstad and the German industrial heartland have been thwarted, at least for now. Hopes that planning law changes in Germany would speed up the project have not materialised, and the congested route may be a decade away from expansion.

It has been hugely controversial since its conception, but the Betuweroute, also known locally in The Netherlands as the Betuwe Line and as the Hollandstrecke in German, has nonetheless been a big hit with freight operators. After a slow start, the line, which connects much of the Ruhr, middle and northern German via Oberhausen to a border crossing at Arnhem, and on to Rotterdam, has grown in popularity, particularly on the German side. So much so, that the line is at capacity, and crying out for an additional track. The route is mixed traffic on the German side, making pathing more complicated.

Too far advanced for planning reform

It had been hoped that new planning regulations in Germany, designed to speed up what has been called the “snail’s pace” of approval by the federal government. The project would add a third track, offering bi-directional flows to be better managed and greatly increase capacity. However, with development so far advanced under the current legislation, there is the irony of the project, which is already in planning, being delayed by the very fact that it is underway already.

The Dutch line is a dedicated direct freight route, that cuts through the middle of The Netherlands, from Rotterdam to Arnhem. It was, and still remains, a subject of huge controversy. Its development cut though the designated Green Heart on the edge of the Dutch Randstad – the conurbation of south west Dutch cities, where open space is at a premium. Opponents of the line claimed it merely parallel an existing highway, and that water-borne transport options were available at much lower cost. However, despite attracting over 14,000 competent objections, the government-backed line was built. Although the scope of the project was reduced, the Betuweroute opening in 2007. It is now a critical part of the Trans-European Transport Network, on the relatively short but intensively used Rotterdam – Genoa corridor.

Congested until 2026 at least

Its usefulness has been vindicated, by the consistent growth in traffic. So much so that the addition of a track over the central German part of the route has been desired, almost from the start of operations. The Emmerich-Oberhausen Project, as it is official designated in Germany was originally expected to open in 2022. However, latest estimates put that back to 2026 at least, with no allowance made for possible delays due to the current pandemic.

At 1.5 billion euros, the upgraded Hollandstreke may represent good value for 92 kilometres through heavily populated regions of the upper Rhine. However, with a delay on the cards, and a formidable raft of civil engineering yet to be completed, the snail’s pace of German planning may mean trains over the section are not much quicker for a few years to come.

Main picture shows a view from the early days of the route, as a Railion hauled mixed heavy goods train rushes through the Dutch countryside on the Betuweroute (Wesseltje14 WikiCommons).