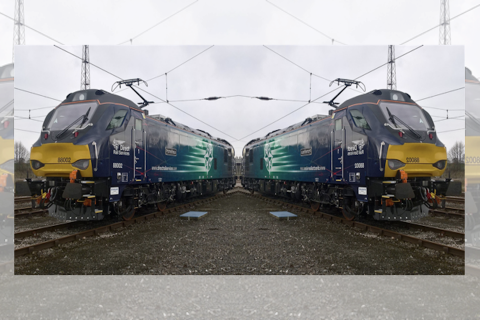 Specialist operators Direct Rail Services (DRS) have made a commitment to carbon-free freight operations, with the commissioning of their class 88 bi-mode locomotives, deployed on electric-hauled express intermodal services between Daventry in the English Midlands and Mossend near Glasgow in Scotland. Social media followers and CCTV caught two examples of the class passing at speed through Lancaster.

The location is nearby the 1945 set for Brief Encounter, regarded as a classic British melodrama. The film is memorable for, among other scenes, the director’s insistence that loco drivers open the throttles on passing steam trains for maximum visual effect. The particulates emissions may be frowned upon today, but the dramatic effect certainly eclipsed the carbon-free encounter caught on camera this week.

Chris Connelly, the recently appointed managing director at DRS, says the company has no intention of emulating film director David Lean and his billowing, steam and smoke-filled stations, no matter how atmospheric. In fact, they are taking positive steps in the other direction. “We’re working to reduce our carbon footprint in any way we can”, he says, “Last year we employed our first ever environmental graduate to look how we can reduce our carbon output.” He says that over the last twelve months, DRS has reduced CO2 emissions per gross tonne mile by 25.11 per cent – emphasising the accuracy of their measurements as part of the forensic approach. “That’s just the start”, he says. “Maximising the use of overhead line equipment is where we’re concentrating our efforts, as running on diesel is freight’s biggest contributory factor.”

Photogenic but no filming plans

88010 and 88006 were captured by railwayman Ian Roberts as they crossed under the wires at Lancaster on 20 August. Connelly says the investment DRS has made in the class, and an advanced diesel-only version designated class 68, is making a real difference. “The 68s have an auto-stop function which cuts the engines when idling to save fuel and reduce emissions. Our 88s have regenerative capability and can put electricity back into the network. Rail freight and rail transport have a key part to play in the low-carbon economy and we’re working hand in hand with all other operators and partners to ensure that we’re ahead of the curve when it comes to reducing emissions.”

DRS began life as a specialist operator for the UK Nuclear Decommissioning Authority, transporting spent nuclear fuel to the national recycling facility at Sellafield in Cumbria, in the North of England. Despite their photogenic locations, DRS is keeping all their action away from the limelight. Connelly says that the company is evolving, and the future is bright. “This is a really exciting time for the company as we move into our next phase of our evolution and look at how we can build on our fantastic work of the past. There are no plans for any radical departures from what we’ve been doing and what we do so well.”

That, as they may have said on the Brief Encounter set, is a wrap. If you are looking for 88010 or 88006, they will probably be hauling their trailers, rather than hiding in them.