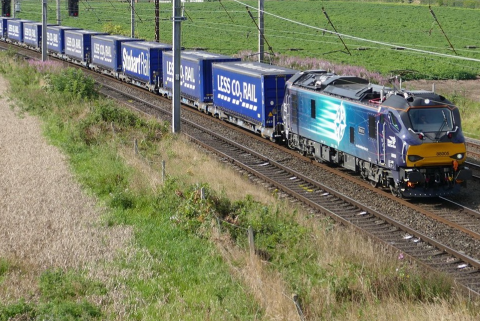 Having started out with a small fleet of underpowered second-hand diesel locomotives that had just retired from construction duties on the Channel Tunnel, Direct Rail Services (DRS) now runs one of the most modern traction fleets in the UK. And they are going further to make it the greenest fleet too.

Governments around the UK have committed to decarbonising their economies, and rail freight has its part to play. With their headquarters in Carlisle, on the border between England and Scotland, DRS has the polices of both London and Edinburgh on the agenda when they plan for the future. Right now, they are moving fast enough to outstrip the ambitions of both administrations.

During the coronavirus pandemic, DRS has been working with infrastructure management agency Network Rail to maximise the length of their trains and minimise their environmental impact. “We are working to reduce our carbon footprint in any way we can”, says Chris Connelly, who has just reached the post of managing director, after a twenty-three year career with the company. He says they now have a specialist on board, specifically to help reduce their carbon footprint. “Over the last twelve months we have successfully reduced CO2e (carbon dioxide emissions) per gross tonne mile by 25.11 per cent. That’s just the start. Maximising the use of OLE is where we are concentrating our efforts. Running on diesel is freight’s biggest contributory factor.”

Even though diesel rail freight beats its road counterpart Connelly says that the days of those old Channel Tunnel locomotives are no longer what DRS is all about. They have modern fuel efficient diesel traction, and technologically advanced bi-modes too. “The investment we’ve made in our class 68s and class 88s is making a real difference”, he says. “The 68s have an auto-stop function which cuts the engines when idling to save fuel and reduce emissions. Our 88s have regenerative capability and can put electricity back into the network. Rail freight and rail transport have a key part to play in the low-carbon economy and we’re working hand in hand with all other operators and partners to ensure that we’re ahead of the curve when it comes to reducing emissions.”

Track maintenance works recently compelled DRS to take a lengthy diversionary route to serve customers between England and Scotland. The upside was an opportunity to use electric traction throughout, and Connelly says it was a fantastic success. “We would certainly consider doing it again. We are always looking to maximise use of running on electricity, even if it did mean running a slightly longer route.”

Enthusiasts welcomed the sight of the state-of-the-art bi-mode class 88 hauling intermodal loads on the East Coast Main Line. Connelly may well have been among them. He certainly enthuses about the work. “I am proud to have seen it grow from humble beginnings to a company with nearly 500 employees and a turnover of 85 million British pounds (94 million euros), all the while retaining its family feel.”

Having started its corporate life as a subsidiary of the Nuclear Decommissioning Authority, DRS is synonymous with the safe transporting of flasks of radioactive materials. To ensure reliability, the short flask trains are routinely double headed, which means DRS runs the most powerful trains in Britain, measured by power-to-weight. “It’s the nature of our work which has set us apart in the industry. We’re always looking to accommodate our customers’ needs and we work very closely with them. Obviously nuclear is at our core but our intermodal, SCO, charter and TOC work are key to the future of the company. Our services lend themselves to customers who require an extremely high level of performance and operate in the critical rail transport arena.”

Keeping the lights on and shelves full

Connelly says he would always welcome more freight moving by rail. “The last few months has really brought the country’s attention to rail freight and shown what an important role it plays in keeping the country moving. I’d often say to my colleagues ‘we’re keeping the lights on and shelves full’, which is absolutely true.”

The new managing director believes the company is moving in the right direction, and his plans are all about evolution, not revolution. “We will be able to have innovative locomotive solutions in the future to help with our commitment to carbon-free running, as we phase out our heritage fleet.” He does admit those old Channel Tunnel class 20 locomotives will always have a special place in company hearts. Maybe after admitting that, he was among those enthusiasts, looking out for that diverted operation a few month’s back, as the carbon-free future of DRS was on commercial display for all to see.