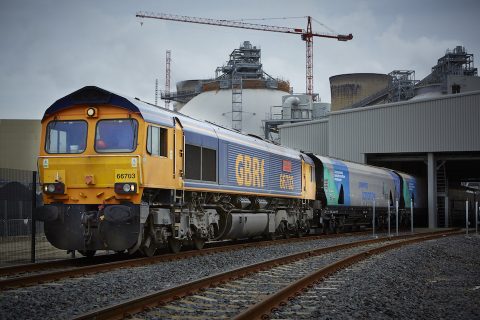 GB Railfreight (GBRf) and energy generation company Drax have agreed to extend their contract to transport supplies of sustainable biomass from UK ports to Drax Power Station in North Yorkshire until 2025. Drax supplies eleven per cent of the UK’s renewable electricity, much of it from this power station. The contract signing took place just as GBRf announced twenty-year rail specialist Tim Hartley as their new business development director.

The power station near the town of Selby, is an iconic part of the North Yorkshire landscape. Originally it was opened as a coal-fired generator, fed from the local reserves. However, the station has been progressively modified to burn wood pellets.

The partnership between GBRf and Drax dates back to 2010 when GBRf began moving biomass by rail from the Port of Tyne. Originally, GBRf used wagons that had been converted from coal hoppers.

These converted wagons remain in use under the new contract. As more of the coal fired furnaces at the power station were converted to sustainable biomass, Drax invested in new purpose-built biomass wagons that are larger and more efficient at carrying the pellets.

The contract extension comes on the back of ten years’ collaboration between the two companies. GBRf may see the extension as reward for reliability, even in the most challenging circumstances. Even during the extensive flooding experienced earlier this year, supplies were uninterrupted. Under the terms of the contract, GBRf will run all of the Drax tonnage from the Ports of Tyne and Liverpool to the power station.

For their part, Drax say the deal is critical to their global biomass supply chain. Around twenty per cent of the wood-based fuel is sourced from North America and shipped to the UK ports. GBRf then transport the fuel in dry hopper wagons. Drax say using biomass represents another step on their own journey to negative emissions.

New appointment at the freight operator, Tim Hartley, said that GBRf was also all about delivering innovative, and reliable services, and had the environment in its business plan. “GBRf is leading the way in decarbonisation, sustainability and has a long-term commitment to building collaborative relationship with its customers”, he said.

Mike Maudsley, who resides in the title of UK portfolio generation director at Drax, welcomed the new deal, and was well aware of the benefits rail freight brings to his business and the wider economy. “GBRf’s rail deliveries are a critical part of our global supply chain for sustainable biomass that supports thousands of jobs and has delivered economic growth across the North of England, while supplying renewable electricity to millions of homes and businesses”, he said. “We are very pleased to extend our existing contract with GBRf for another five years and we’re looking forward to continuing to work with the team.”

Celebrating its twenty-first year in business, GB Railfreight is currently the third largest rail freight operator in the United Kingdom, with an annual turnover in excess of 200 million British pounds.

Paris connected to south of Italy by shuttle train