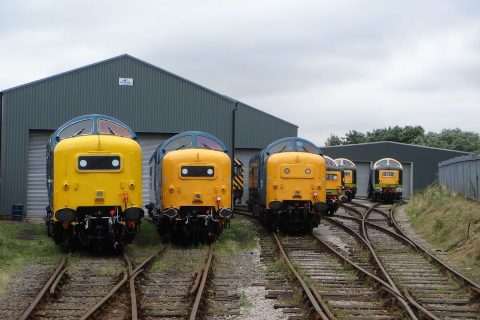 What are the alternatives to an addiction to diesel traction?

It will prove difficult for rail freight to turn its back on the motive power that has been synonymous with industry for over a century. Due to its versatility, developed sophistication, and the sheer energy density, there is no single alternative to diesel fuel technology. That was the message for delegates at the recent Chartered Institute of Logistics and Transport Rail Freight Forum.

The UK government advisory body, the committee for climate change, has told their parliamentary colleagues that the economy needs to reduce its annual emissions of 90 million tonnes of carbon dioxide to just 15 million tonnes by 2050, if the UK is to meet its legally-binding targets on climate change.

Addressing the rail freight forum of the CILT, Jonathan Brown, technical and innovation engagement lead at consultants Ricardo Rail, told his audience that the most difficult sector to decarbonise, and free from diesel power, would be the transport industry. He suggested that rail freight would be among the most stubborn challenges to face.

Even though rail freight is around four times more energy efficient than road transport, argued Brown, the sector still manages to use a staggering 153 million litres of diesel fuel annually. Not that anyone would care to swim through it, that is enough to fill 64 Olympic-sized swimming pools. By comparison, the passenger sector gets through around 200 swimming pools worth of fuel annually.

The chemical advantages of diesel are formidable. High energy density makes it difficult to name a replacement, given current technology. Brown says that it will take a suite of solutions, but the big incentives of emissions and politics are equally formidable drivers. “There is unlikely to be a one size fits all solution”, says Brown. “The diesel engine is a remarkably versatile technology.”

Nevertheless, alternatives must be found. Assuming a long-term economic recovery, figures given to the forum noted that even if rail freight’s share was doubled, the country would still need a 30 per cent increase in road capacity, just to keep pace with economic development trends. “The typical intermodal train haul is 1500 tonnes over a distance of 230 miles (368 kilometres)”, says Brown.

Rail may not be playing its full hand, and there is a belief that considerable road traffic could make a modal shift, promoting a significant change in transport based emissions. The potential for decarbonisation could be substantial already.

Brown returned to his argument that there is no single answer, but he believes electrification will undoubtedly be the prime answer to prime movement by diesel. “Electrification is very much back on the agenda. There is a traction decarbonisation network strategy, moving on to a programme of rolling electrification”, says Brown. That will be a solution, even if wires are not universally installed. “Battery locomotives, charging under the wires for when they are off the grid, is an answer, but they require quite considerable additional power for charging.”

Typically, 6-7 megawatts are required for traction alone. Power constraints already exist on the network. Even where lines are energised, there is still work to be done on power provision. The line between Newcastle and Edinburgh is a prime example, with diesel power is required on some services as electrical supply is fully committed.

On the positive side of the equation, there are several alternatives available to help fulfil Brown’s hypothesis that several solutions will be required. In addition to wires and batteries, he presented a number of solutions, from atmospheric gasses to biofuels. Some alternative fuels are chemically compatible with existing engines, he said. That could provide a more cost-effective way to decarbonise, when taking account of the capital outlay of acquiring new traction.

However, Brown sounded a word of caution on the necessary speed of changing the infrastructure and fuel supply chain. “Is there going to be enough green energy by 2030? There is a phrase that has been gaining currency lately: green energy poverty. It means that energy storage is critically missing in our network at the moment. I don’t think we will be fossil fuel free by 2030.”

With new diesel traction still being delivered around the world today, it is extremely difficult to say when, if ever, we will really be carbon free. “Carbon coming out of the ground and transport is seen as the most challenging area”, says Brown. “Will those diesel engines still be viable? Yes, if some sort of net zero fuel can be used. It is not the end of internal combustion for a while yet, but hopefully they will run with a zero carbon diesel fuel alternative.”

Perhaps a more localised economy, that requires less travel and transport is the only real answer to a carbon-zero economy. However, even in that scenario, significant modal shift to rail will still be required, and if that shift is to be a driver for a green future, then a diesel rethink is certainly part of the agenda.