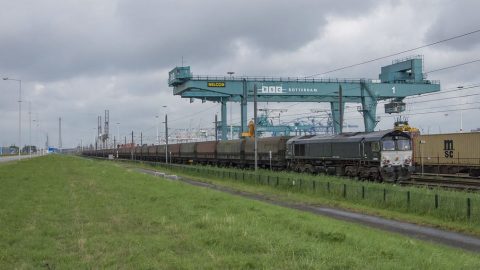 LTE goes ahead with 740-metre trains in the Netherlands

Rail carrier LTE is satisfied with the first results of test drives with freight trains longer than 700 meters. The company will therefore continue operating these trains next year. That’s what CEO Jolanda Plomp said during Multimodal Online 2020.

Until recently, freight trains in the Netherlands had a length restriction of 650 meters. For some time, this limit has been pushed to 740 meters. However, operating such long trains is still in its infancy. LTE is currently the only one in the Netherlands and it was an initial test, in which the trains ran on the Rotterdam-Venlo-Viersen-Mannheim route and mainly transported container loads. The test will be the topic of discussion at today’s RailFreight Live broadcast.

The project is being carried out in collaboration with infrastructure manager ProRail and German counterpart DB Netze. The long trains runs in between the regular timetable, both for freight and passenger trains.

“We want to offer our customers the opportunity to transport more cargo by rail”, Plomp explained during the event, which took place in the last week of June and was organised by sister publication Nieuwsblad Transport. “Besides that, we just enjoy trying new things.”

An important point of attention is, of course, punctuality. This is a must, especially if the starting point of the ride is in the Netherlands. From Rotterdam, the train only had a delay of more than three minutes, one out of eight times. “Also with Kijfhoek as a departure point, the delay was only ten minutes in one of four cases. At Venlo, departure was smooth in almost all cases. ”

Conversely, the results were less prosperous. In Mannheim’s, only one out of four trains left within half an hour of the scheduled time. Also at the stop in Venlo, in the direction of Rotterdam, only one train left within thirty minutes of the planned time.

During the event Plomp pointed out that the corona problems started shortly after the first test journeys with longer trains. As a result, most of the tests period has currently taken place with an unprecedented empty track. Significantly fewer trains ran in both the Netherlands and Germany. As a result, there was more space for the longer LTE trains.

“The question remains how things proceed when the passenger carriers return to their normal timetable”, said Plomp. “We also have to wait and see what happens when several rail freight operators start using longer trains. And above all, whether they will all run simultaneously or in rapid succession, or whether they will be more spread over the day and the week. If you all arrive at a terminal at the same time, the capacity is quickly allocated, of course.”

Which other problems does she expect if more railway companies will take the same step as LTE? “At some points we see that the infrastructure is not yet in order. Suppose that all carriers will be running two to three longer trains in one day, then we will have problems with the shunting, before arriving. We are aware of this, both ProRail and LTE. A plan is underway for this, so that we will be ready for it in the future.”

A large part of the terminals appears to be ready. Of the terminals that were visited, only the track at ECT on the Maasvlakte had a maximum of seven hundred metres. “As a result, we had to take off one wagon on arrival and one on departure. That gives a delay of ninety minutes per direction. ECT pays the costs of the extra shunting.”

The longer trains hardly cause any problems when loading and unloading. “There is a time frame in which you have to load unload. I have not experienced that we did not meet those window times. The unloading takes a little more time, but we managed to do it within the time frame.”

Despite some problems and uncertainties, LTE is enthusiastic about the longer trains. The company is therefore determined to continue and ProRail is also positive. “We have already applied for the paths for 2021 and they have already been awarded. As far as we are concerned, we are going to go ahead with it.”

Do you want to hear more about the 740-metre trains in the Netherlands and surrounding countries? It will be the topic of discussion in today’s RailFreight Live. This will be broadcasted at 1pm on our YouTube Channel.