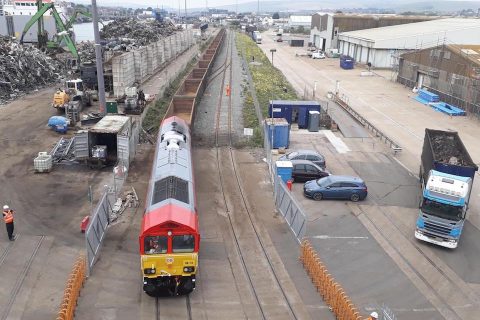 There are new horizons opening up for Newhaven, the ferry port on England’s south coast. The fluctuating fortunes of the East Sussex terminal at the mouth of the River Ouse are on the ebb of revival, thanks to a rail freight initiative.

Freight has begun to flow from the quayside at Newhaven, but the emphasis is on rail, rather than maritime transportation. A revival of the railhead is underway, and it may ironically spell the end for Newhaven’s famous ghost station.

Bulk flows of aggregates, to serve the burgeoning London construction boom, may give the terminal a new lease on life, and with a plan for expansion, the infamous station with no trains may well finally, legally, close later this year, to make way for new freight facilities.

Tests have begun to prove the viability of reactivated infrastructure, and a DB Cargo ’66 has already visited with a rake of bulk wagons to perform shunting operations around a reactivated yard.

Newhaven Marine, a notionally open passenger station lies within the revived freight terminal, but it last saw a revenue earning train when Gnarls Barkley was going Crazy at the top of the charts in 2006.

Ferry operations have moved upstream, confusingly served by Newhaven Town station, and the passenger and freight terminal has been largely disused since then. Only the expense of legal procedure has kept the station nominally served by a daily empty stock working. If nothing else, it has kept the rust off the rails.

The fortunes of the port have varied over the years, peaking at two million tonnes of freight in the mid-1980’s, when a mixture of aggregates, scrap metal and ferry traffic supported several railheads, including a container terminal on the quayside.

In that year, the operators, Newhaven Port & Properties (NPP) took matters in hand with an undertaking to review the port masterplan for the medium to long term.

The vision for the future has emphasised sustainability, seeking to make Newhaven a ‘green port’ through reducing its carbon footprint and becoming a focus for renewable energy. With the political agenda moved very much in that direction, the timing seems right.

Fortunes are on the up, and the green deal has been encouraged by Newhaven being selected as the base for E.ON to develop its Rampion offshore wind farm.

Bulks in the short term

A stable future has encouraged the operators to investigate the potential to reinstate rail freight services onto the quayside, despite the sidings having lain derelict for over twenty-five years.

Locally based consultants Intermodality were appointed to review the rail freight prospects. “In the short term, bulk commodities are likely to offer the most promising prospects for re-establishing rail services, particularly aggregates”, said the conclusion of their report.

Legacy sidings back in use

The sound of a workhorse class 66 diesel in the yard, running tests in mid-June, was tangible evidence of progress. Collaboration between the consultants, the port operators, Network Rail, and aggregates supplier Brett, who were planning to develop a new terminal for marine aggregates on site, along with a cement plant, have culminated in bringing the disused legacy sidings back into life.

Network Rail’s Local Delivery Unit (LDU) streamlined the process and, in harmony with a major resignalling programme locally, the necessary works were completed in time for last Wednesday’s test train.

The first shipments of aggregates from the site are imminent, ready to serve London and the South East. Newhaven has risen from a quarter-century slumber. Proof positive that prospects for reactivating long-disused railheads need not be terminal.