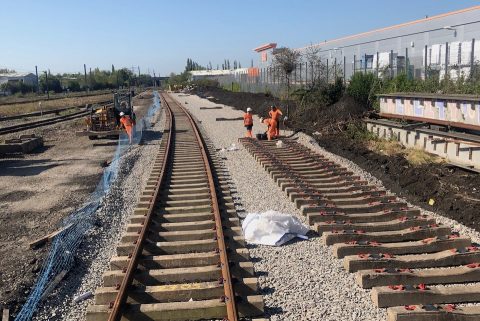 Rail freight professionals in the UK have overwhelmingly chosen increased network capacity as the primary factor required to enable sustainable growth in the sector. This was concluded in an online poll, conducted by corporate law firm Addleshaw Goddard and UK’s Rail Freight Group.

The poll found the sector in confident mood. Almost two-thirds of respondents said that addressing capacity was at the top of their priorities. Nearly a half of all those polled also wanted better access to the network, so that customers and potential customers, could make better use of existing facilities provided by the sector.

Long way to go on emissions

Paul Hirst, head of transport at Addleshaw Goddard who hosted an online discussions around the poll, noted that growth needed to be sustainable, in line with the government commitments in the UK to a greener, zero-carbon economy. He said that capacity enhancement had to go, hand in hand, with sustainability. In that respect, he said, rail freight still had a long way to go.

Even during the coronavirus lockdown, Hirst noted, emissions had only dropped by about eight per cent. He said that there were considerable challenges ahead if the rail freight sector was to make its contribution to a zero-carbon economy by 2050.

The poll took place just as one of the leading operators, GB Railfreight, was commissioning its new intermodal sidings at Peterborough. As part of a programme of expansion, the company is seeking to take advantage of the development in the market, anticipated by today’s poll. Confident of an upturn, GBRf say they are looking to increase capacity at the site further, by completing alterations to existing sidings and installing additional infrastructure to provide improved access to the electrified East Coast Main Line.

While diesel remains the mainstay of motive power, there are moves to make alternatives means of moving freight around the UK. Some ‘last mile’ bimode locomotives are already in service with DRS, and Freightliner is currently preparing former electric express passenger locos for freight duties.

Maggie Simpson, director general of the Rail Freight Group, agreed with Paul Hirst, and proposed that, in addition to the long-term goal of zero-carbon, the rail freight sector faces three challenges. The sector, she said, starts with making an immediate recovery from the pandemic and lockdown.

On the horizon, Simpson said trading after Brexit was the next priority, followed by the a long-term aim to play a part in rebalancing the UK economy outside of the South East of England.

Commenting on the poll findings, and the balance of the economy, Henri Murison, the director of the Northern Powerhouse Partnership, which advocates economic development in the North of England, said now was the time to press ahead. He said that with passenger traffic suppressed, possibly for an extended period, there was an opportunity both for network development and for freight to take advantage of the capacity temporarily released.

Industry should not just concentrate on its existing customer base, he said, but it must also work to attract new flows, and address the needs of potential new business.

With industry lobbing for government to become more involved, there is a growing body of opinion behind a rapid decarbonisation of the sector. Earlier this week, the Railway Industry Association called for an order of alternative fuel trains to be placed by the government (see RailTech here). Geoff Lippitt, the business development director at PD Ports, who also took part in the debate, says that his company is already moving down that route. In 2021, they will begin trials of a hydrogen fuelling station at Teesport, principally for inhouse logistics, with potential for third party use in future.

The ability to adapt and the pace of change will determine rail freight competitiveness in future, concluded Lippitt. With a cautious optimism, and a willingness to look beyond the current situation, he said now was the time for the industry to consider how the supply chain may look in ten year’s time. With a modicum of planning, rail freight may well have to adapt to a much larger share of the market, and start now to put in place the capacity that will be needed.