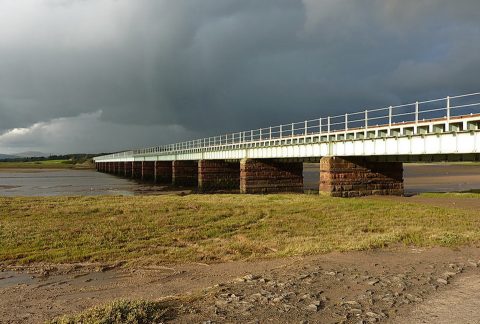 Having only just reopened after extensive repairs, a planned investment and upgrade programme will close the Cumbrian Coast Line, in the north west of England, again later this month.

The UK infrastructure agency, Network Rail, is about to embark on a major investment to improve and maintain a nineteenth-century estuary bridge, vital to freight and passenger traffic, on the exposed Cumbrian Coast line. The Eskmeals Viaduct will close between 20-29 June for the works to be completed.

o) Great North Rail Project investment will see wooden timbers and 600 metres of rail renewed on the 18-span Eskmeals Viaduct which carries the railway over the River Esk estuary.

The section provides a southerly connection to the West Coast Main Line for fishing and former ship-building communities, including Maryport, Workington and Whitehaven, and for the UK nuclear fuel reprocessing plant at Sellafield.

Sellafield is the destination of the Direct Rail Services operated nuclear flask trains. DRS has just just restarted using the northern section of the line, from Carlisle, following reinstatement work at Parton. The line there runs between the village and the high-water mark. It was extensively damaged during a series of storms in February.

Structures on the exposed coastal line require frequent maintenance, and Eskmeals was closed for a day recently for urgent repairs. Eddie Pollock, new business planner with Direct Rail Services, said that even unplanned closures do not affect their robust delivery schedule. “We are looking on this very much as Parton in reverse”, he said, making note of the recent enforced closure to the north of Sellafield. “Nuclear fuel flasks are a very specialist cargo, with which we have extensive experience. The fact that the reprocessing plant can be approached from two directions make us all the more confident we can continue to deliver during periodic maintenance schedules like the project Network Rail are embarking on at Eskmeals.”

The low-lying viaduct, the longest on the 85.5 mile (137.6 km) route, dates from 1868, and is largely original. The upgrade and new permanent way will allow a speed restriction to be lifted, and the installation of improved access walkways for future maintenance works. “Investment at Eskmeals Viaduct will ensure that the Cumbrian Coast line remains safe and reliable for passenger and freight trains for many more years to come”, said Phil James, North west route director for Network Rail.