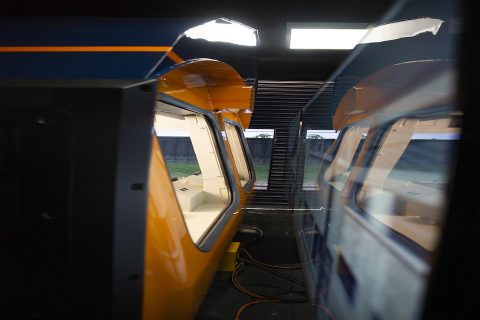 UK operator GB Railfreight has announced extra investment in its Cambridgeshire properties and facilities despite economic uncertainty. The investment package covers training for the future, and trading for the here and now.

Taking a longer-term view of the economic position, and notwithstanding the ongoing coronavirus crisis, GB Railfreight (GBRf) has announced a series of investments into existing facilities and properties in Cambridgeshire.

The company has taken an optimistic view, and forecasts that the ongoing national and international disruption caused by the pandemic outbreak will have an affect in the short term, but will not deflect their ambitions for the years to come.

The London headquartered company regards these developments as a statement of their intent for the future, and expressed their belief in the ability of the UK economy to recover and grow. “GB Railfreight is unveiling a raft of improvements to its facilities in Cambridgeshire as a sign we are confident in the resilience of the British economy”, said John Smith, their managing director. “These announcements will also have an impact on how we go forward as a business. We look forward to the next chapter for GBRf.”

With an eye on the next generation of rail professionals, the company says it is continuing to invest in its Peterborough campus, where training and operational functions are based. The site is home to what GBRf calls their state-of-the-art simulators. “This announcement demonstrates the company’s commitment to investing in the UK economy at this time of uncertainty,” added their statement.

The simulator suite at Peterborough, claims the company, is the UK’s first and only full cab freight European Rail Traffic Management System (ERTMS) capable facility. Taken one bite at a time, that mouthful means GBRf can bring next generation rail professionals up to speed with the technologies that are being adopted across European networks, in a realistic environment that, they believe, is industry leading.

Out in the field, the company has announced continued development of its terminal site at the nearby town of March. Following on from infrastructure upgrades at the yard in late 2019, further work has been commissioned to prepare for expansion.

Earlier this year the company announced a three million British Pounds (3.4million Euro) investment in building a new control room, three classrooms, a board room and staff welfare facilities. The company is delivering further investment at the site including upgrades to the locomotive fuelling system that will improve performance and the safety. Wagon maintenance and stabling has also been improved.

GB Railfreight has also been working with construction company Balfour Beatty and infrastructure agency Network Rail to create new intermodal sidings, and also better serve their bulk commodities customers. Since the company acquired the site at March, they have been better positioned to service rolling stock locally. This has particularly been advantageous for clients like aggregates and materials multi-national Sibelco. The client, who have stringent environmental standards themselves, require flows from the east of England to project delivery in the north.

The depot at March is an efficient pit stop for wagon maintenance, eliminating maintenance trips to facilities in Doncaster – saving 200 miles (320km) of running. “The strategic acquisition and subsequent development of March not only means we’re improving the efficiency and simplicity of the service, but it is also a fuel saver and better for the environment”, the company says.

Waste not, want not

GB Railfreight celebrates its twenty-first anniversary this year, as the third largest rail freight operator in the United Kingdom.

Incidentally, the cab environment at the Peterborough simulator suite was built with the remains of locomotive 66734, which was irrecoverably derailed by a landslip in the remote west of Scotland, at Loch Treig, in 2012. GBRf consider it to be their most visible commitment to corporate recycling. Well, it was never going to become a tourist attraction, lying low in the Highlands. We believe the fateful working does not feature on the simulation programmes.