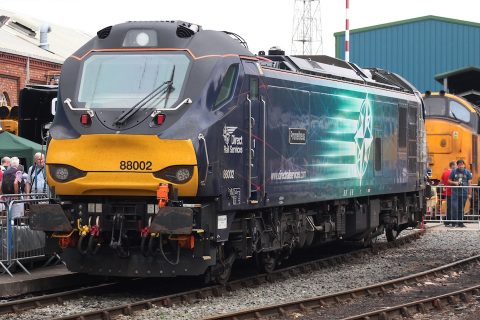 Unusual sight of freight train through centre of Edinburgh

The UK early May Bank Holiday meant engineering works on the West Coast Main Line, but Direct Rail Services kept supplies moving by shifting to the other side of the country. Bi-mode traction was put to good use for the first time on the East Coast Line. The company is all set for a repeat performance over this long weekend too.

The route would normally follow the West Coast Main Line but engineering work required a diversion. This used to mean using diesel powered Class 66 locomotives but the new path allows the entire journey to be powered by the overhead lines on the equivalent East Coast route.

Electrically hauled Daventry to Glasgow containers are a reliable sight on the West Coast Main Line, except when the engineers move in and force a diversion. Getting round the permanent way renewal is nothing new for the DRS planners, who usually find a path to avoid the works. Last weekend though was a little different. Instead of ditching the rostered class 88 Stadler Euro Dual for a diesel 66, they took the long way round, and provided the intermodal service with an intercity trip via London and a lengthy detour to reach the East Coast Main Line.

The unusual sight of freight through the centre of Edinburgh was made necessary by following the only wired route through the capital. That routing goes straight through Waverley Station, under the famous Castle. Heavy traffic normally makes that problematic, but the reduced passenger timetable opened up a path for “4Z45” to access Central Scotland and arrive at Mossend, near Glasgow, under electric traction as normal.

“This is a fantastic new route which enables us to utilise our excellent Class 88 locomotives as usual rather than replacing them with a diesel-powered engine”, said David Robinson, deputy director of operations delivery at DRS. “Running on electricity allows the engines to be much more environmentally friendly and helps with our commitment to reduce CO2 emissions.”

The northbound run, started … by heading south. Well, the whole world is upside down right now. From Daventry Intermodal Railfreight Terminal, the consist headed for Wembley and across London to join the East Coast Main Line at Finsbury Park, just 2 miles (3.2km) from southern terminus of the ECML at Kings Cross.

The versatile bi-mode 88s carry a 940hp (0.7 MW) diesel to back up the 5400hp (4MW) electric primary. On most of these weekend runs however, a bigger back up – in the shape of a diesel ’66 – will be along for the ride between Edinburgh and the English Border. That 60 mile (100km) section has some power supply issues, which are yet to be upgraded. Some passenger services are regularly required to operate bi-mode or diesel too.

Over the weekend, five flows are planned for the temporary routing. “Due to further engineering work on the WCML there will be five services, two on Sunday and three on Monday”, said the company in advance of the workings. “Four will run with the addition of a class 68 behind the 88. This will power the train between Edinburgh and Chathill and then the Class 88 will use electric power. The final train will use a single Class 88 for the entire journey.” The ’68 is the visually similar diesel stablemate of the bi-mode version.

The long detour still makes economical sense for DRS, and the environmental benefits are evident too. “We are delivering vital goods across the length of Britain”, adds Robinson. “This over 400-mile journey highlights the benefit of rail freight and the smart use of utilising our electrified rail network.”

DRS say they intend to use the route using electric power whenever the WCML is unavailable. Edinburgh Castle can get used to a few more visitors who started out heading south to get all this way north.

A photo would have been nice!