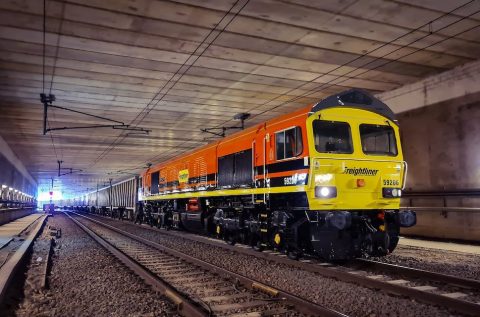 The first dedicated class 59 locomotive of Freightliner has been spotted, sporting its new G&W livery. It demonstrates the continuing partnership of the railway company with Mendip Rail, just as construction materials continue to flow. It is what keeps major infrastructure and development projects working in the face of current restrictions.

Driver, and accomplished photographer Rich Acres captured this image of Freightliner locomotive 59206 “John F. Yeoman”, pristine in its new G&W livery, pulling its first train on a service to Harlow Mill in Essex for Mendip Rail. The location is the Highmeads Enclosure, in Stratford, north east London. “Believe it or not, it is actually a bridge, not a tunnel”, says the photographer.

One of a kind for now

The new livery acknowledges Freightliner’s US parent, Genesee & Wyoming Inc., commonly known as G&W. However, this may be the only example of the class for a while, as the livery programme is on hold, classed as non-essential during the coronavirus crisis.

The key work, in which 59206 is engaged, is part of a long-term contract, commenced in November last year, for bulk haulage on behalf of Mendip Rail Ltd. This is a joint venture between two of the UK’s largest aggregate and cement producers, Hanson Aggregates and Aggregate Industries. Freightliner hauls aggregate from quarries owned by the companies in the Mendips region of Somerset, to terminals in London and the Southeast of England for use in various construction projects including housing and road improvements.

Freightliner says that despite the current pandemic challenges, the operator has continued to haul aggregate for Mendip Rail to ensure vital construction projects can continue. “I am delighted with how well the contract with Freightliner is progressing and, in particular, the professionalism, flexibility and resilience demonstrated by their bulk haulage team in keeping vital construction materials moving during these challenging times”, said Mendip Rail’s Director, Jason Black. 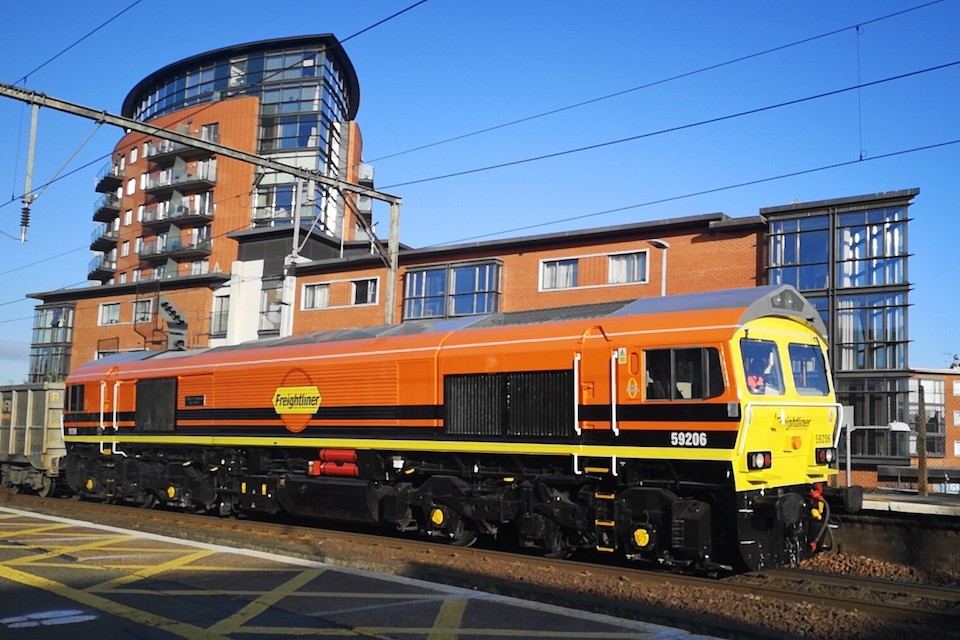 As part of the contract, Freightliner purchased eight Class 59 locomotives from Mendip Rail, the first of which has been refinished in the G&W livery. Subsequently, an additional six Class 59 locomotives were purchased from DB Cargo. Further repaints of the Class 59 fleet have been postponed due to the COVID-19 crisis, says the company.

The bulk movement of construction materials by rail remains an environmental priority, particularly in the Southeast and London, where pollution is a recognised problem. “Rail freight is key to meeting the decarbonisation targets set by government while also relieving congestion on busy roads”, said David Israel, Freightliner bulk commercial director.

While concerns have been raised in the media over the safety of construction workers travelling, particularly around London, the environmental and health benefits of rail have been apparent during the crisis. Freightliner is looking ahead in that respect. “Rail freight will also have a key role to play in supporting the recovery of the wider UK economy as we emerge from lockdown”, added Israel. “The Freightliner Mendip partnership is ensuring that vital supplies of aggregate continue to be made available for construction works in London and the South East during these unprecedented and difficult times.”