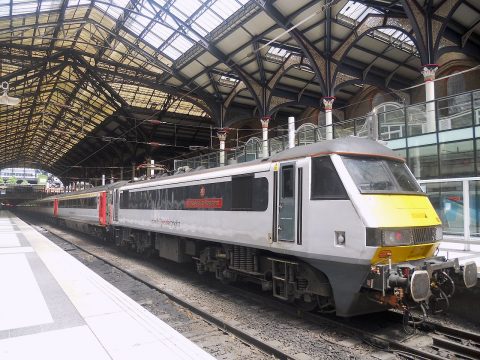 With passenger fleets updating to new, multiple unit operations, there is a tried and tested fleet of electric locomotives ready for a new life at the head of freight trains around the UK. Efficient hand-me-down-history is repeating itself around the network.

Abellio Greater Anglia is renewing its passenger fleet and, as reported in January, Freightliner has been named to take possession of thirteen express electric locomotives – designated class 90 – that are now surplus to requirements. The units are coming off duties, hauling inter-city passenger trains between London, Ipswich and Norwich in the east of England. Two further units have gone to a charter operator.

Greater Anglia, the branding for the regional franchise, managed by state-owned Dutch operator Abellio, with Japanese trading company Mitsui as a joint stakeholder, has run the locos for over fifteen years. As is common in the UK, the motive power is owned by an intermediary, in this case the rolling stock leasing company Porterbrook. Porterbrook themselves made the headlines recently by announcing the acquisition of the former Quinton Rail Technology Centre, at Long Marston near Stratford upon Avon, altho these locomotives will not be heading there for intermediate storage.

The motive power move was first mooted in January, when delivery begun of a fleet of new Stadler built EMUs, which have replaced the loco-hauled stock. The 90s had been in full service since 2004, and previously were deployed on the East Coast Main Line.

The locomotives have proved themselves over time. Built from 1987 at Crewe, the class was originally ordered by the former British Railways, with a production run of fifty units in total. Almost all of the fleet is still operational, although about half are stored, and some are stripped for spares (production ceased in 1990). Freightliner and DB Cargo UK now operate the majority of the fleet, with specialist charter operator Locomotive Services Limited running two examples.

Express passenger locomotives have habitually found themselves transferred to freight duties in the latter part of their operational lives. Earlier electric classes have found favour with freight operators. Most notably the “class 86”, which was the mainstay of West Coast Main line services from the 1960s until the “Pendolino” fleet entered service in the first decade of this century. Examples of the class are still in service, both in the UK and in eastern Europe.

Towards the end of steam hauled operations in Britain – coincidentally around the same time as the class 86 fleet entered service – prestige locomotives could be found on heavy haul freight services. Even the world-record holding “A4 Pacific” class, ended their days on more sedate goods duties.

Speculation exists that the related Class 91 locomotives, spiritual successors to the A4s, may soon follow suit. The distinctive 91s, are currently still largely deployed on East Coast Main Line passenger services, although several operators have expressed interest. Two examples are already in the hands of Europhoenix, a ‘spot hire’ company with interests in the UK and eastern Europe. While these two examples may soon be seen on Continental rails, the remaining 29 units have a host of suitors for fast freight and intermediate passenger operations.

Longer term use of electric traction for freight operations is inevitable, if the UK government targets for a greener economy are to be met. There is of course still much work to be done on extending the electrification of the network, but redeployed former passenger locomotives will go some way towards bridging the pier gap at the front of the trains.

Meanwhile, the fast and flat running of the east of England may not be over for all the 90s. Some may return to operate intermodal traffic in the area. Deployment though is still to be announced. The locomotives are currently understood to be stored at Crewe, pending service reintroduction later this summer. Back where they came from, over forty years ago.