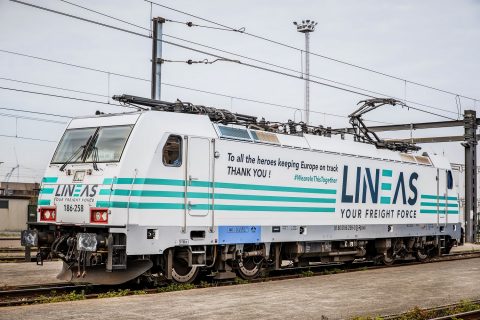 Lineas has revealed a new locomotive to honour today’s heroes in the battle against the coronavirus. The ‘Heroes locomotive’ is wrapped in white and was revealed on Thursday in Antwerp in respect of all healthcare workers, but also other critical jobs that keep society on track during this crisis.

Jeroen Spruyt, director Assets & Network Operations at Lineas: “This is our way of thanking all the people at the frontline of this crisis. Medical staff in the first place of course, but also people in other critical sectors such as supermarkets, pharmacies and transport. At Lineas, we have hundreds of people who work hard every day to transport critical supplies such as food, medicine and disinfectants. We are all in this together and we hope this locomotive will boost the spirit of everyone who sees it.”

The symbolic gesture by Lineas comes at a critical point for the rail freight sector. With market demand decreased by 20 to 30 per cent because companies have stopped production, rail freight companies are asking the Belgian government to support their sector in its mission.

Raphaël de Visser, spokesperson for Lineas: “We are taking our responsibility very serious. Despite the crisis, Lineas keeps driving trains to bring vital supplies to businesses and consumers. However, we will also play an important role after when we help our customers to rebuild our society and economy. The Heroes locomotive is a thank you to all the people at the frontline of this crisis but also a call to action to support us in our mission.”

Immediately after the reveal, the locomotive will be put to use in Lineas Green Xpress Network transporting goods all over Europe. For the train enthusiasts, train routes will be shared only after the confinement measures have been lifted in the countries it passes through.