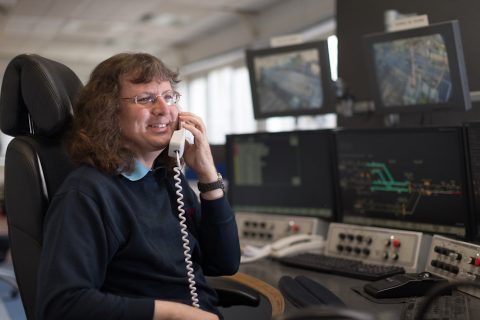 400,000 tonnes of vital supplies through Yorkshire every week

England’s biggest county is also one of the biggest rail freight hubs in the UK. With the coronavirus pandemic making smooth logistics even more critical, stakeholders have been celebrating the contribution made by operators and key workers around Yorkshire. Some have even been asked to come out of retirement to help during this time of crisis.

With so many vital traffic generating hubs, Yorkshire is so important to the UK rail network that if it did not exist, it would have to be invented. The unjustified stereotype of dour unfriendly people is being disproved on a daily basis, as key workers put in extra shifts and extra effort to make sure that supplies for the county and the rest of the United Kingdom get through reliably and efficiently.

Delivered all over the UK

Network Rail, the infrastructure agency in the UK, has praised key workers in the region, who are working relentlessly. They are enabling vital medical supplies, food, drinks and consumer goods to be transported around Great Britain during the Coronavirus crisis, says the agency.

The headline figure of 400,000 tonnes of freight every week, which is moved by rail across Yorkshire, includes around 100,000 tonnes of supplies, including food for supermarkets and medication. Much of that originates outside the county, and is destined for terminals all over the UK.

There are also significant consignments for delivery within Yorkshire, including 150,000 tonnes of biomass to keep Drax Power Station running so it can continue to supply the electricity upon which millions of UK homes and businesses rely.

Andy Koss, Drax CEO Generation, said teams were working around the clock. “The power station is the UK’s largest. It’s critical that we continue to receive the vital supplies of sustainable biomass we need, especially during the Covid-19 emergency. We are working very closely with the teams in our supply chains, who are playing an important part in keeping the lights on”.

While the entire Yorkshire network is working hard, the principal East Coast Main Line carries the most traffic. According to Network Rail, flows include overnight Royal Mail services; and around 50,000 tonnes of steel manufacturing materials and products shipped to and from the major works at Scunthorpe in neighbouring Lincolnshire. The rail freight network also supports other transport modes, with 12,000 tonnes of petroleum fuel traversing Yorkshire every week.

Kevin Newman, Senior Route Freight Manager for Network Rail, said the railway plays a crucial part in keeping Britain running, particularly in these challenging times. “Our teams are working hard to keep lines open for key workers, enabling vital freight services to run to keep shelves stocked and deliver vital medical equipment and to keep power stations going. We are continuing to work closely with the government and transport partners to keep the railways open and keep Britain moving”.

Keeping the railway operating safely is, of course, a priority. With a shortage of staff, mainly due to the coronavirus crisis, Network Rail has issued an appeal to retired signallers. The agency says they need the experienced staff to return to work to cover shifts that would otherwise be in the hands of staff who are absent due to self-isolation measures or other health-related issues.

The experienced staff are needed for roles in the Rail Operating Centre in York and at signal boxes at other locations across Yorkshire. Chris Gee, Head of Operations (Eastern Region) for Network Rail, appealed to former colleagues. “We are appealing for signallers who have retired, moved on to other careers, or left the railway to come back and help us keep signal boxes and control centres open”.

Meanwhile, a public consultation over significant enhancements to the network in part of Yorkshire has been extended. Proposals to upgrade the railway between Huddersfield and Dewsbury, part of the critical east-west Transpennine route, has been kept open until 30 April.

The Transpennine Upgrade, which would see the route between York and Manchester via Leeds and Huddersfield vastly improved, creating a more modern and reliable railway and better connections across the North. The proposals include the redevelopment of several passenger stations and other infrastructure works.

Anyone who thinks this concentration on operations in Yorkshire is rubbish … is correct. Along with all the other cargo movements, 10,000 tonnes of household waste per week is removed by rail from urban areas across the county. In Yorkshire, even the trash goes by train.