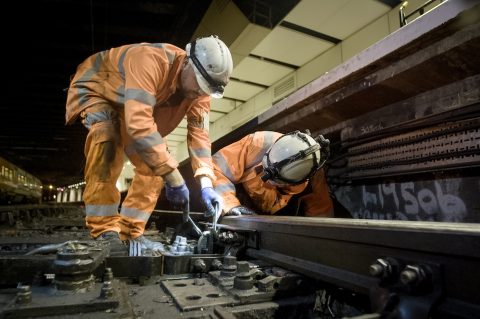 Coronavirus or not, the UK rail network is still being kept safe, secure and maintained. Infrastructure contractors are out night and day, across the country. Security services are on patrol, and safety inspectors have not eased up their investigations.

Network Rail and their contractors, including crews from across the rail freight industry, are continuing to maintain the network, despite the 21-day lockdown ordered by the Prime Minister since Monday.

With freight given top priority, and the passenger timetable greatly reduced, there is a little less pressure on the permanent way assets of the railway, but there is still plenty to do. A rolling programme of maintenance on the British network is necessary to keep modern trains running on a system that was largely conceived over 150 years ago. For example, recently completed landslip repairs near Salisbury in the south of England and at Dumfries in the south of Scotland has returned routes to operation and increased capacity.

Tim Shoveller, managing director for Network Rail North West and Central region, said colleagues have been working around the clock. “We are continuing to plan carefully while supporting our railway colleagues, especially those in critical front line roles, as we all work together to support Britain in its hour of need. Our role in Britain’s coronavirus response is clear – to keep key workers and vital supplies moving safely as together we rise to this challenge.”

Also facing up to challenges, British Transport Police, in cooperation with Network Rail, have launched a safety campaign, aimed at keeping trespassers off the railway, especially during the current crisis. The campaign, dubbed ‘You vs Train’, is considered to be of even more importance, with schools closed for the foreseeable future, and parents seeking to fill their children’s time at home. Both organisations are urging parents and carers to speak to their children and loved ones about the dangers posed by the railway and the importance of staying off the track.

“Every year”, says a statement issued jointly, “There is a rise in the number of trespass incidents ahead of the Easter school holidays”. The concern this year is that the UK is under lockdown until then and schools are effectively closed, making the problem even more acute. “With an undefined absence from school and the knowledge that fewer passenger trains may be running, there could be an even greater temptation to stray onto the rail network”, adds the statement.

“We are continuing to proactively patrol the thousands of miles of railway network we police across Wales”, said Beata Evans, a British Transport Police Inspector, who works with her colleagues in the that part of the country, and will continue to patrol during the lockdown.

“Safety is our number one priority. We are asking that we all speak to the young people in our lives and make them aware of the importance of rail safety, so that they understand that everyone loses when you step on the track.”

Meanwhile, also carrying out enquiries, regardless of the lockdown, the Rail Accident Investigation Branch has formally announced that it is looking into an incident earlier this month, when a loaded goods wagon ran out of control, during the morning rush hour, crossing public roads before being derailed by trap points at a mainline junction.

The incident happened on Monday morning, 9 March, when a tank wagon loaded with cement powder ran away from a siding within the Hanson cement works in Clitheroe, Lancashire, in the north of England.

Runaway not a success

After bursting through the works gates, the wagon ran on towards Horrocksford Junction, where the industrial line connects to the main railway line from Blackburn to Hellifield. Two road vehicles took avoiding action at one of the level crossings compromised in the incident, before trap points did their job. The wagon was derailed, upright, clear of the main line, after an excursion of about 0.75 miles (1.2 km).

“Our investigation will seek to identify the sequence of events which led to the accident”, said an RAIB statement. “It will also consider any factors relevant to the performance and design of the wagon’s braking system, how the risk of runaway wagons from within the cement works was controlled and any relevant underlying factors”.

While an investigation would be standard at any other time, the need for vigilance on the railway is not diminished by the coronavirus crisis, nor the UK-wide lockdown. In times like these, when the country depends so critically on the railways, and the wellbeing of workers has never been more vital, most commentators agree it would be mad not to go all health and safety.