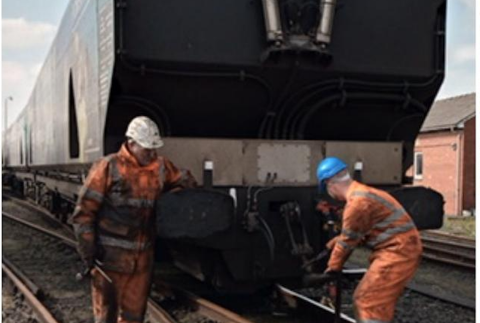 While intermodal trains are now rushing past each other on the main lines of the UK, enjoying the same status as express passenger services, there are other loads out on the rails, just as important to the nation. Fuel supplies are critical to the nation, and bulk loads are being kept moving by experienced specialists.

The UK was put into a 21-day lockdown yesterday evening in a stark prime ministerial address, delivered by Boris Johnson direct from 10 Downing Street. The stay at home message was clear to all but the most insensitively reckless. Yet still, key workers have to be out today, and every day, making sure the nation is fed, treated and, in some cases, kept warm too.

The freight railway has already been identified as critical to the nation. The distribution of food and essentials has been given top priority, along with medical supplies. However, while the intermodal traffic is proving a flexible and high-profile example of the national effort, the more discrete movement of other supplies is just as important.

Among them are bulk fuel supplies, destined for power stations around the country, which will keep the lights on in Britain’s 22 million homes, while the majority of the population endures at least three weeks of confinement. Those power supplies are even more critical for the food chain and medical infrastructure, to keep the healthy well fed, and the infirm well protected.

The daily deliveries of biomass to the Drax power station complex in North Yorkshire are critical. The high-intensity operation requires constant specialist care of the unique rolling stock fleet, maintained by Davis Wagon Services, headquartered in Immingham, on the nearby Lincolnshire coast.

Les Bryant, the company group engineering director, considers their field teams as nothing less than key workers, especially during the current coronavirus crisis. “Our experienced wagon maintenance teams were out working across the UK to keep our customers fleets moving during these difficult times, including the Drax fleet of Bio Mass hoppers, helping to keep the lights on, and the supplies we need available”, he said, speaking just before the lockdown was announced last night.

Modestly getting on with the job

The importance of Drax to the UK energy supply grid is not lost on Bryant nor the nation at large. Even if movements are less visible than the containerised supplies going into urban distribution centres, the need to keep bulk traffic moving is critical.

However, in a modest repost, which underscores the efforts of crews working on with a new sense of national integrity, Bryant does not overplay their hand, and rather just says they are doing what everyone is being called up to do. “In the UK Rail freight Industry we all have a part to play to support this country during difficult and strange times, and at DWS we will continue to do our bit”.

One freight driver, showing immense modesty, told RailFreight.com a similar story. “Totally understand things are changing at an alarming rate”, he said. “Job to be done. Let’s get on with it”.

If the shelves are to remain stocked, the hospital to remain operational, and the lights to remain on, it is the sort of modest endeavour upon which Britain will rely in the coming months.