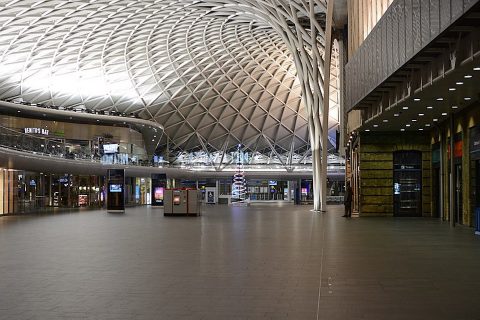 Deserted concourses and empty platforms. The passenger network is becoming like Christmas Day, every day. With the British government placing stringent restrictions on movement and business activity, the rail freight sector has an increasingly important role to play. Supporting the economy and the very well-being of the country has become a top priority. The sector stands ready to answer the call.

It has become essential viewing in the UK – the daily afternoon press conference from Downing Street. Yesterday, with an escalation of advice and directives rendering almost all public places out of bounds, the government alluded to the increasingly difficult situation under which the economic supply chain is operating. In some cases, the strain is proving of grave concern. Workers who, by necessity, interact with their colleagues on a physically close basis are finding restrictions particularly onerous, making many logistics tasks extremely difficult.

In an effort to keep the country supplied, the UK government has asked British business what it can do to help the country get through the crisis. Industry has answered with a host of manufacturers planning to make over their production capacity to the building of medical equipment and supplies.

The rail freight sector has been responding positively. The necessity for the supply of goods, especially food and household essentials, is expected to become critical in the coming weeks. Rail freight is in a position to help, and keep vital supplies on the move.

Eddie Pollock, new business planner at Direct Rail Services, said they had a significant part to play, especially in supplying further flung parts of the country, such as supermarkets in the north of Scotland.“Although we are obviously supporting all our clients”, he said, “We are placing a special emphasis on intermodal traffic right now”.

In confirmation of that, reports around the UK suggest that domestic intermodal is running with good loadings. There may be some expected drop off in overseas trade, with less ships docking at UK ports in the short term. However, home produce is being moved around efficiently and with a good degree of bio-security – particularly for operational staff.

“We are vital to the supply chain”, says Pollock, in a comment that might equally apply to the whole sector. “Getting foodstuffs and consumer goods to the supermarkets is vital for the country and a priority for us. Our logistics priorities are to get train crews in place and make sure we keep train crews healthy”.

DRS is also responsible for the movement of nuclear fuels around Britain. It was the original business model for the company, from which grew the current diverse fright operation. There’s no talk yet of diverting resources away from that business, although there is scope for limited deferral of such loads.

The representative body, the Rail Freight Group, has issued a statement, expressing their reassurance to members around the county.“We are aware that the situation is highly concerning for all our members and staff”, it says. “The RFG team stands ready to help support our members through this period, and we will be sending out frequent updates with relevant information as we receive it”.

Adding to that, and speaking to RailFreight.com in a brief respite from a round of conference calls, Maggie Simpson RFG director general, told us that the industry was reviewing and formulating its position almost constantly. “I am working with the industry right now, as we pull together to best effect. We will be issuing a statement in the next day or two, on what is a very fluid situation”, she said.

RailFreight.com understands that talks due to start today, 18 March, have been suspended. The UK and EU representatives had already been scheduled to meet by video conference, but with all available personnel conscripted to the coronavirus emergency, talks have been suspended. Like many other loads and priorities, even the political upheaval of Brexit has be shunted into the sidelines for the moment.