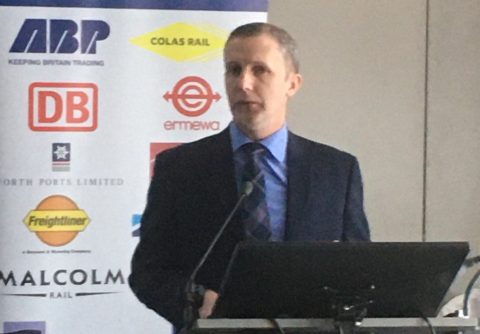 Rail freight opportunities are better than ever. Transport Secretary to the Scottish Government, Michael Matheson, has told the Scottish conference of the Rail Freight Group, the industry’s representative association in the UK, that the present climate was conspiring to make the industry more attractive than ever. He also took the opportunity to announce a funding grant of GBP1.49m (euro1.72m) for facilities at an east of Scotland location, diverting road traffic away from a major trunk route.

The minister was speaking at the Hilton Strathclyde Conference Centre, nearby the Mossend rail freight terminal, to which he made reference during his keynote speech this morning. He argued that the Scottish government had “matched words with actions” and made significant and ambitious pledges to champion the rail freight industry, including a GBP25m (euro29m ) ring-fenced fund for support to small and medium rail freight initiatives.

The minister pointed to several planning works, including the government’s rail freight strategy and “a focused and direct specification for Network Rail”, he said. “I cannot stress enough the opportunity for rail freight just now in the current climate. Keep in mind, we have a supportive policy framework and politicians who understand. We have aligned targets, funding, a dedicated team of individuals in a number of organisations who, simply, I would say, get it”.

Rail freight provides GBP192m to the Scottish economy, said the minister. “A significant contribution and one which I wish to see increased”. The minister then went on to announce a Freight Facilities Grant (FFG) to Tarmac, to support expansion of their bulks operation at Dunbar, a seaside town served by the East Coast Main Line. “Tarmac is a key user of rail, and a strong advocate for the industry, and they’re looking to expand the operation they have at Dunbar”. The minister added that this will maintain rail as the key mode of transport for their heavy operations.

“Scotland is leading the way in past and present commitment to rail freight”, said Matheson. “I hoper that in the not too distant future I can announce a further FFG to a base in Scotland”.

A network that delivers for freight

The minister went someway towards countering the argument that his department is still bias towards road development, noting that GBP8bn (euro 9.2bn) had been invested sine 2007. Matheson was adamant his government was committed also to the future of rail. He pointed to the active part the Scottish government was playing in the Williams Review – the Westminster sponsored examination of the railway structure. “This is a once in a generation opportunity.”, he said. “I have met with Keith Williams and stressed the importance of a rail network that delivers for freight. It must be responsive and changing. We now have specific targets for freight, however much more can be done if there was further devolution of rail powers to Scotland”.

Concluding, the minister made a plea to industry to work in partnership with public agencies, and a demand to government in the UK at large. “It is no secret that we will publish our decarbonisation plan in coming weeks. We know that there additional options for passenger traction but for railfreight it is different, and full electrification is the only option – end to end freight journeys. Join me in making a plea to the Department tor Transport, to complete end to end electrification of key lines south of the border. This is a further call to arms, a fantastic growth plan, and joint working with private sector partners is vital”.

The minister did not take questions but did meet in private with selected representatives of the industry afterwards. Given the Central Scotland location, and the proximity to Coatbridge, the British Rail established container terminal. Read our story here. Railfreight.com did enquire about the prospects of the terminal. It was suggested that a statement may be made, but the issues around the terminal were matters for the operators to address in the short term.

The future projects of the sector are on the agenda as the RailFreight Summit comes to the UK for the first time. The RailFreight Summit UK takes place on 7 April in Manchester, Britain’s fastest-growing regional economy and an industrial hub, where rail plays a vital role in supporting development and enterprise. Registration for this event is now open. For more information you can visit the website.