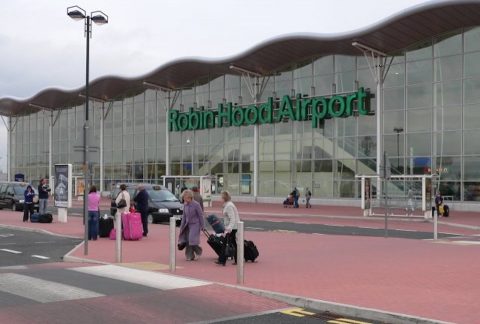 Proposals to reinvigorate the Doncaster Sheffield Airport as a new commercial hub create up to 33,000 jobs in the process has rail freight at the heart of the plans. The consortium of business interests behind the scheme say that a short rail link, and a freight yard directly connected to the airport would provide a new national and regional rail connection.

Local authorities and business interests have presented a plan to national government in Westminster under the working title of The GatewayEast Growth Hub Rail. Sheffield City Region, Doncaster Council and the owners of the airport, the Peel Group, have submitted a plan that involves the building of a 4.5km link between two existing main rail routes, and adding new passenger and freight facilities.

If adopted, the plan would give Doncaster Sheffield Airport the first purpose built rail freight terminal in the UK. Plans released by the consortium show the terminal located directly adjacent to the runway and between freight and commercial developments.

The airport, also popularly known as Robin Hood, has no existing rail freight facilities and only a poorly located basic passenger station, which is among the least used stations in the UK. The detailed business case, now in the hands of the UK department for transport, asks for the projects to be included in the DfT Rail Network Enhancements Pipeline.

The scheme, claim the backers, could support 33,000 new jobs in the region in the next decade, with the first 10,000 within five years. They also say the development would significantly reduce road congestion and emissions, while the rail connection wold significantly grow the regional economy.

Peel Group, the airport owners, already have extensive rail freight experience within their extensive portfolio around the UK. It has not been revealed as to whether the proposal might also include an application to become a freeport within the UK government scheme, also announced recently, and reported on RailFreight.com on Monday (read that story here).

Reported in the local newspaper, the chair of the airport, Robert Hough, was bullish about the value of the proposals. “The return on investment from this scheme is greater than the forecast benefits of the entire eastern leg of HS2 but delivering years in advance and fully complementary. It is essentially ‘shovel-ready’ and deliverable within five years. Doncaster Sheffield Airport demonstrates exceptional value for money for the tax-payer with a 22:1 return on its £300m investment”.

The development of new, purpose built rail freight facilities is very much a topic of debate, given the climate change agenda. The RailFreight Summit UK in Manchester (7 April) is anticipating a well attended session on the subject (more details here).

If the plan goes ahead, the new alignment required would be the biggest deviation to the East Coast Main Line since the 1983 re-routing to avoid coal mine workings at Selby, just north of the airport.

Colas gets Salisbury back on tracks