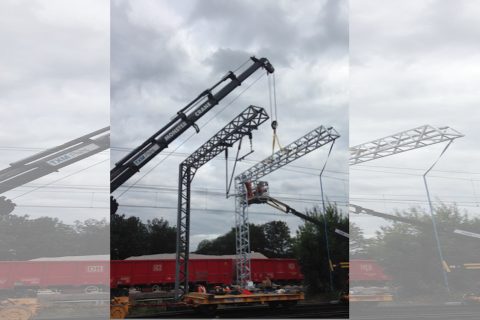 A consortium of business interests from around the UK has called on the UK government to immediately start a programme of rolling electrification to help meet the target of decarbonising the railway by 2040. The call comes from the influential Civil Engineering Contractors Association (CECA), the Electrical Contractors Association (ECA), alongside a cohort of rail-specific voices, among them the overarching representative bodies, the Rail Freight Group (RFG) and the Rail Industries Association.

Maggie Simpson, director general of the RFG, who is delivering the industry address at the RailFreight Summit UK and is already an outspoken advocate of electrification, says it is a means to make rail freight even more attractive as an environmentally secure way to develop the post-Brexit UK economy. “Rail freight is already the environmental choice for freight movement, but we cannot be complacent”, she said.

“Electrification is the only proven technology to decarbonise rail freight, and government must start a rolling programme to electrify key routes, supporting private sector investment in new locomotives, and ensuring a low carbon future solution for freight customers and wider society.”

The message has been delivered to the UK government in an open letter to the transport secretary, Grant Shapps, at his departmental Great Minster House offices in London. Shapps retained his portfolio in the weekend cabinet reshuffle, which saw his junior ministerial team change, with Blackpool MP Paul Maynard replaced at minister for HS2 by Andrew Stephenson, another north of England representative.

Noting the government commitment to the HS2 project, Elaine Clark, chief executive of Rail Forum Midlands and a co-signatory to the letter, wanted a firm plan for the future to make the most of expertise gained in one-off projects.“Government commitment to a long term rolling programme of electrification is essential if we are to meet the challenges set for decarbonising the railway and contribute to wider UK emissions and air quality targets”, she said. “It is also the only way we can retain and develop these essential skills in the industry thereby driving the reduction in delivery costs that have been identified as possible.“

The thousands of businesses and organisations represented by the signatory bodies have all urged the UK government to end what they call the stop-start nature of past electrification schemes. They want the government to introduce a ring-fenced rolling programme fund that allows the rail industry to extend electrified track over several years.“Kick-starting a programme of electrification on intensively-used rail is essential if the government is serious about delivering on its goal to decarbonise UK rail by 2040”, said Darren Caplan, the chief executive of the Railway Industry Association (RIA), the long-standing representative body for the railway supply industry. “Not only are electrified trains key to decarbonisation, electrified tracks are more reliable, reduce costs in the long term”.

Caplan argues that costs of installation can be significantly reduced, making the industry-wide call much more viable. “Research conducted by RIA has shown that the costs of electrification schemes can be lowered by up to 50 per cent compared to some past projects”, he said. “We urge the transport secretary to make this a top priority as the new government develops its Infrastructure strategy in the months ahead”.

The letter to Shapps warns the transport minister that now is a critical time for rail electrification, with a void in the programme after the current two main line projects are completed, from London to Cardiff and London to Market Harborough, leaving rail freight with complicated gaps, under which there are no wires. “Once these schemes are complete”, reads the letter; “there will be no electrification schemes taking place in the UK and, with no construction-ready schemes in the pipeline, there will likely be a significant hiatus before new projects are ready for construction. This could lead to a loss of capability and skills in the supply chain”.

The letter points out that rail freight, according to industry figures, is already a low carbon mode of haulage that delivers benefits in excess of GBP 1.7bn (euro 2bn) each year to the economy. The transport secretary may well be advised to take that into account when considering his response.