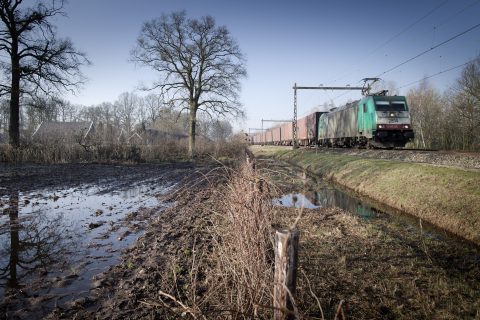 Column: Follow the Germans to be an important rail theme in 2020

Published on 03-01-2020 at 11:50
A freight train on the corridor Hengelo-Oldenzaal. Picture: Hollandse Hoogte

In 2020, ‘Follow the Germans’ will be an important theme for the Dutch rail sector. If the Netherlands works more with Germany by harmonising the specifications of ERTMS with Germany, to convert trains to ERTMS together and to invest in axle counters, bigger markets will be created, writes Hans-Willem Vroon from lobby organisation RailGood. In his column, he sets out the most important themes for the rail freight industry.

COLUMN – It has become difficult to run a business in the Netherlands. The decision-making of the Dutch government is slow on the one hand, and on the other hand rail operators have business and commercial urgency. What makes things harder in the rail sector is you also have to contend with complicated issues such as the implementation of ERTMS.

For ERTMS, the problem is around converting locomotives. Market parties want the government to stump up for the whole cost, while the government only wants to foot half the bill. However, there are ways to get around this, for example by not shunting ‘the last mile’ under ERTMS. If this is the chosen option, then shunting locomotives do not need to be converted.

For locomotives it is crucial that they are available at low cost. Converting the locomotives will cost between 125,000 and 300,000 euros, yet in the coming 15 years the operators are not going to benefit from the ERTMS system. We need to see if we can tackle this enormous financing issue by making progress in the provision of cheaper (modern) locomotives.

In addition to this, the Dutch government and the port of Rotterdam want to reduce CO2 emissions, for example by replacing diesel locomotives with more sustainable locomotives. However, modern, shortline, feeding and last mile locomotives that are used in other countries cannot go on most parts of the Dutch rail network.

This is because in parts of the shared network, the GRS detection system with track circuits is unable to recognise lighter locomotives, so this system needs to be replaced by axle counters.

With all these issues we need to be aware that we are dealing with a waterbed effect.The European Commission’s recent climate plan, the European Green Deal, will give European rail freight transport a big boost. Three quarters of freight transport by road should gradually be transferred to rail, inland and coastal shipping (modal shift). The Betuweroute is by no means suitable for all transport as a hinterland connection. The files must be viewed both nationally and internationally.

This also applies, for example, to taking noise and anti-vibration measures, for example on the IJssel line as part of the Bentheim route. If the Netherlands has hinterland connections through urban areas, adjustments must also be made to infrastructure and spatial planning.

The share of low-noise trains will increase sharply in the coming years due to stringent German noise legislation, substantial investments by the business community in low-noise equipment and a well-functioning subsidy for making equipment low-noise. Noise measures on the track and proper maintenance are and remain crucial.

In addition, the government must also ensure that new-build houses should not be built too close to the tracks and that sound and vibration-adaptive houses are realized. In the longer term, a northern branch of the Betuweroute is desirable for both transport and residents of the railways. A Noordtak also saves valuable track expansions in the Randstad in the long term.

If people’s houses are damaged, this also needs to be looked at. In recent years there has been an enormous expansion of the High-Frequency Track Programme (Programma Hoogfrequent Spoor), and this expansion will continue in the coming years. When this happens, properties around the track must not be bought up for less than their market value, as defined by the Valuation of Immovable Property Act (WOZ). We must keep the effects on the surroundings under control.

In January a pilot will be starting in which passenger trains and freight trains will be run more slowly. NS trains will travel at 110 kilometres per hour, and freight trains at 60 or 40. This is a move in the wrong direction, as it will increase the journey times of freight trains by at least twenty to thirty minutes. To make this work well, it must be made possible to travel across the Netherlands from terminal to terminal on a green wave. Ultimately it is about the train being competitive with the truck, both in terms of costs and speed.

A range of solutions is required, and we expect the government to devise policies which are coordinated nationally and internationally. One good option is set out in the Future Image of Public Transport (Toekomstbeeld OV), which calls for better alignment between passenger and freight transport.

The Dutch-German trade volume with 190 billion euros is one of the largest in the world. Germany is the Netherlands’ first trading partner, both in terms of exports and imports. More than a quarter of Dutch exports go to Germany. Partly by train. Rotterdam is Germany’s largest port. Almost 90 per cent of rail freight transport crosses the Dutch-German border. In Germany, just like in the Netherlands, many hinterland rail lines also run through urban areas. This is how our Betuweroute flows into the densely populated Rhein-Ruhr area.

Both the Dutch and German governments and governments want freight transport by rail to grow strongly with targeted measures. In addition to the Netherlands, Germany has a strong innovative rail industry. Both the Netherlands and Germany intend to invest many billions of euros in ERTMS in the coming two decades. A decisive role for rail to make Europe CO2 neutral around 2050 can only succeed with a joint German-Dutch approach. The motto for 2020: less Dutch Alleingang and more follow the Germans.